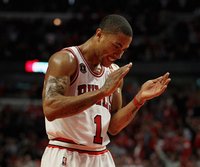 UPDATE: What we pretty much knew this morning is now official. Derrick Rose is the 2010-11 NBA MVP. He finished with 1,182 points including 113 first-place votes, from a panel of 120 sportswriters and broadcasters throughout the United States and Canada as well as an NBA MVP fan vote. Rounding out the top five in voting are Orlando’s Dwight Howard (643 points, three first place), Miami’s LeBron James (522, four first-place votes), the Los Angeles Lakers’ Kobe Bryant (428, one first-place vote) and Oklahoma City’s Kevin Durant (190).

He came, he saw, he told us he would, and then he conquered.

Derrick Rose is on the verge of becoming the NBA’s youngest MVP ever.

Coming off a spectacular regular season, during which he (along the Bulls’ stifling defense) led Chicago to the best overall record in the L, it was never really in doubt who the most valuable player in the Association was this year.

The Chicago Tribune has the details:

On the eve of training camp, Derrick Rose famously and rhetorically asked why he couldn’t be the NBA’s most valuable player. Rose, according to multiple sources familiar with the announcement, will get this answer on Tuesday: He can. Rose, sources said, will receive the award during a Tuesday afternoon news conference at a local hotel. Commissioner David Stern will present it to him again before Game 2 of the Eastern Conference semifinal series against the Hawks on Wednesday at the United Center.

At 22 years, 7 months, Rose will become the youngest MVP in NBA history, supplanting 1969 winner and Hall of Famer Wes Unseld by roughly five months. And he will do so by taking a huge jump, becoming the first MVP winner since Dave Cowens in 1973 to win the award without receiving one vote the previous year.

Rose, for the most part, has reverted to his aw-shucks routine when asked about the award since asking his pre-training camp question. But he grew reflective over the weekend when asked what he would do with the award, saying he would give it to his mother, Brenda. She also has Rose’s Rookie of the Year award, won after the Bulls selected him with the first overall pick before the 2008-09 season. “If anything, she’ll probably steal it from me if I do get it,” Rose said. “That would be a great (Mother’s Day) gift if I could give it to her.”

It may be awards season in Chicago, but the team finds itself with much larger concerns.

They’re now in a somewhat unexpected dogfight against the Atlanta Hawks, who shocked the Bulls by taking Game 1 in convincing fashion last night.

Tom Thibodeau and Derrick Rose will need to prove all over again why they’ve each been annointed as the best in the biz over the course of this second round series.