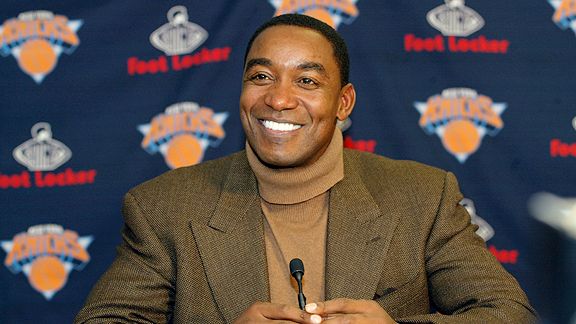 Seven years after he was terminated as Knicks head coach, it’s expected that Isiah Thomas will be the new president of the WNBA’s New York Liberty. That’s according to ESPN‘s Chris Broussard via Twitter:

Sources: Isiah Thomas has been named President of the New York Liberty of the WNBA. Thomas will also have part ownership of the team.

Isiah Thomas is back at Madison Square Garden.

Thomas has been hired to be president of the New York Liberty of the WNBA. An official announcement with come later Tuesday. An ESPN report stated Thomas also will have an ownership stake in the team.

During a disastrous stint as Knicks president and coach, Thomas was implicated for sexually harassing former team executive Anucha Browne Sanders, who received an $11.6 million settlement from the Garden in 2007.

His goal since leaving the franchise has been to regain the Knicks presidency, but Phil Jackson signed a five-year deal in March 2014. Ironically, Thomas interviewed Jackson in 2005, trying to lure him to become the Knicks head coach. He hired Larry Brown after Jackson turned him down and went back to the Lakers.

Thomas’ last position in basketball was as head coach of Florida International University. The Hall of Famer was terminated by the school in 2012. He has been working for NBA TV as a studio analyst and doing charity work for his foundation.

The Liberty, coached by Thomas’ former Pistons teammate Bill Laimbeer, open their season June 5 at the Garden against Atlanta.