Report: Jimmy Butler Intrigued With a Potential Offer from the Lakers 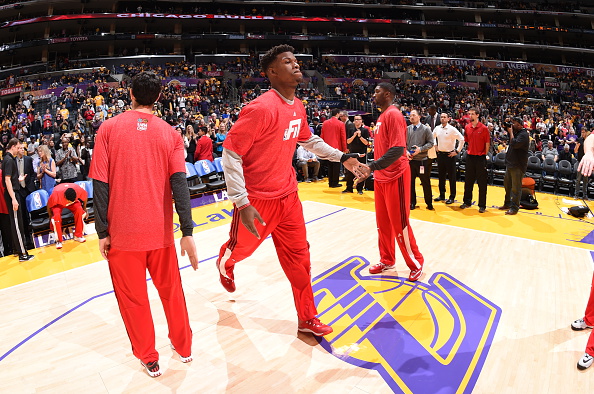 Soon-to-be restricted free agent guard Jimmy Butler said back in November that he plans to ink a long-term deal with the Chicago Bulls.

With restricted free agency looming, the 25-year-old is now exploring all of his options, including a potential short-term offer from the Los Angeles Lakers.

Butler is said to be seeking a shorter deal this summer, as a sprinboard into unrestricted free agency a couple of years from now and huge money (as in $190 million over five seasons huge.)

For Chicago, there’s no challenge to retaining Butler. As a restricted free agent, the Bulls have matching rights on any offer sheet. Nevertheless, Chicago could be faced with Butler’s agents at Relativity Sports, Happy Walters and Steve McCaskill, loading up a short-term offer sheet that includes a trade kicker and the potential loss of Butler to unrestricted free agency in 2017.

Unless Bulls officials bring Butler a shorter-term deal that’s more favorable to his long-term earning power, they’ll likely be waiting to match an offer sheet, league sources said. […] Butler could sign a three-year offer sheet that guarantees him $50 million, but allows for a player option on the third year that could allow him to move into unrestricted free agency and re-sign for a five-year, maximum deal worth as much as $190 million. It is understandable why Chicago wants Butler locked into a five-year, $90 million max extension under the current salary structure, but that appears to be a deal Butler plans to pass on.