Report: Kevin Durant ‘Does Not Consider the Knicks as a Destination’ in Free Agency 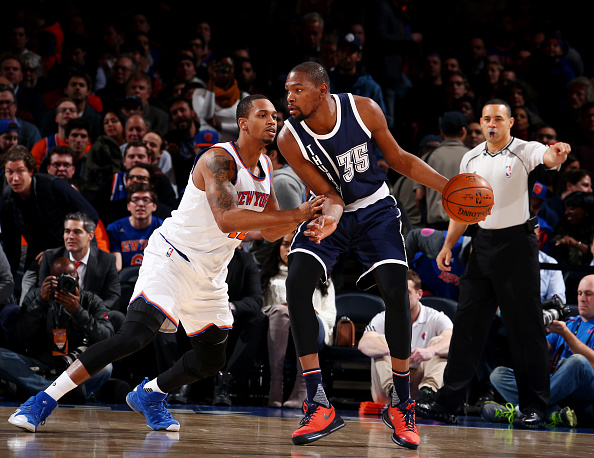 The Lakers? The Wizards? The Warriors? There are a handful of teams around the NBA whose fans remain hopeful that Kevin Durant will leave Oklahoma City in search of greener pastures. But according to a report, the New York Knicks are not on that list of potential suitors. Stefan Bondy of the NY Daily News reports that as Carmelo Anthony begins to recruit top free agents to New York, KD has already ruled out the Knicks as a potential destination:

Forget that the Knicks have an unresolved situation at coach, they’ll also need to get creative with the roster just to free up enough cap space for a max free agent. A source told The News that the biggest fish in the summer pond, Kevin Durant, does not consider the Knicks as a destination.

The Thunder are 43-20 and 3rd in the Western Conference right now, but Durant has gone on record saying that they’re “fooling themselves” if they think they’re a great team. Durant is averaging a career-high in rebounds per game (8.3) to go along with 28.1 points and 4.7 dimes a night.