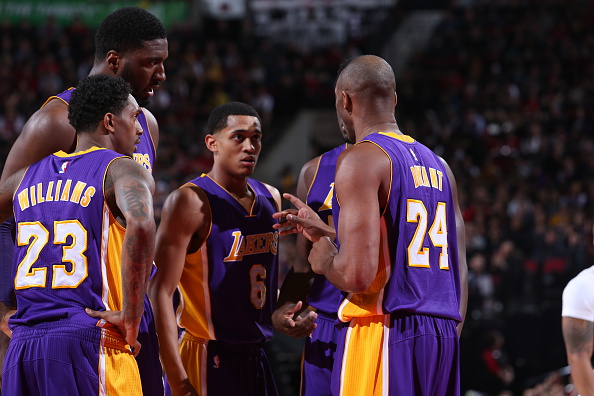 The Lakers lost a sixth straight game on Saturday night, this time spoiling Kobe Bryant‘s final trip to Portland with a 121-103 blowout defeat. And after the game, Kobe was reportedly upset at some of the younger players on the Lakers roster—including rookie D’Angelo Russell and fellow youngster Julius Randle, specifically—for taking the L so lightly, including “smiling.”

That’s according to Mark Medina of the Los Angeles Daily News:

Bryant, who posted 10 points on 5-of-9 shooting and five turnovers in 25 minutes through three quarters, became upset both with the Lakers (9-37) for losing their sixth consecutive game and for some on the team smiling after the loss, sources said. Bryant took particular aim at Lakers rookie point guard D’Angelo Russell and second-year forward Julius Randle and even called them out by name, sources said.

“You know I don’t do the gossip [expletive],” Bryant said in a friendly exchange when asked about the incident.

None of Bryant’s teammmates, including Russell and Randle, were specifically asked about Bryant’s criticisms because Los Angeles News Group learned the revelations after media access to the locker room ended. But multiple sources confirmed that Bryant spoke for about two minutes after Lakers coach Byron Scott addressed the team.