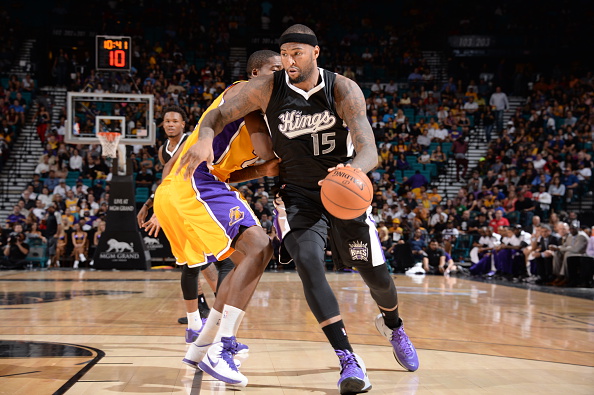 DeMarcus Cousins to the Lakers to team up with Kobe Bryant?

It’s only a rumor at this point, but it’s a hell of a fantasy for Laker fans. According to a report on Monday, the Lakers are “actively” looking for a way to acquire the All-Star big man from Sacramento.

This weekend, though, Kings front office head honcho Vlade Divac said in response to all the DMC trade questions: “That is not happening.”

In truth, it’s hard to imagine what the Kings might want from the Lakers, beyond this year’s No. 2 pick and maybe Julius Randle, LA’s top pick in last year’s Draft. But there’s a three-way trade scenario involving the Orlando Magic that might make things work. For now, it’s just wait-and-see for the Lakers. Best believe they’ll be blowing up Vlade’s cell with trade offers, though.

From Marc Stein of ESPN.com:

The Los Angeles Lakers have emerged as one of the most determined trade suitors for Sacramento Kings All-Star center DeMarcus Cousins, according to league sources.

Sources told ESPN that the Lakers have been actively pursuing trade scenarios in recent weeks in attempt to construct a deal that would convince the Kings to part with Cousins.

Sources say that the Lakers, Kings and Orlando Magic have had exploratory dialogue on a three-way Cousins trade that would land the 24-year-old in Los Angeles. All three teams hold top-six picks in Thursday’s NBA draft, and Orlando has a young top-flight center of its own in Nikola Vucevic, who could theoretically fill the Cousins void.