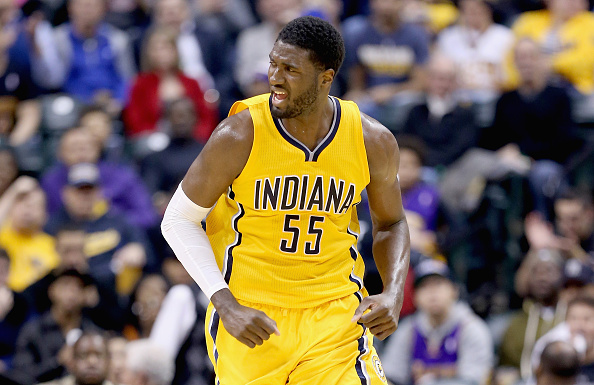 Roy Hibbert is headed to the Lakers. The final particulars of the trade haven’t been officially nailed down, but it’s happening. Hibbert, 28, is going to be a Laker, in exchange for a second-round pick and some cash considerations. The move comes after the Lakers missed out on LaMarcus Aldridge and Greg Monroe, and opted to draft point guard D’Angelo Russell instead of big man Jahlil Okafor with the No. 2 overall pick in the draft.

Hibbert was informed on Saturday that he can expect to be moved to the Lakers once an agreement in principle is reached, league sources told Yahoo Sports. The Pacers have informed some rival teams – including those with an interest in Hibbert – that they had found a deal for him, league sources said.

The final hurdle in the deal centers on the 15 percent trade kicker that activates with Hibbert and his $15.5 million salary for the 2015-16 moving to the Lakers. Los Angeles has the salary-cap space to take on that salary and the $2.3 million trade kicker – essentially a bonus the Pacers must pay Hibbert – but Los Angeles wants to find a creative way to preserve more cap room in the deal, league sources told Yahoo Sports.

After the Lakers absorb the $2.3 million trade kicker, it will leave them with less than $5 million available under the cap to spend elsewhere in free agency. There are several possible solutions to the snag, but both sides believe they will find a resolution and the deal will be formalized when the NBA’s moratorium on player business ends on Thursday, sources said.

The Pacers will receive a future second-round pick as part of the proposed deal, sources said. Indiana has been determined to unload Hibbert’s contract and move forward with a sleeker, faster offensive style without him. Indiana reached an agreement to sign guard Monta Ellis to a four-year, $44 million contract this week.