Lakers Get Chris Paul, Give Up Gasol, Odom in Trade 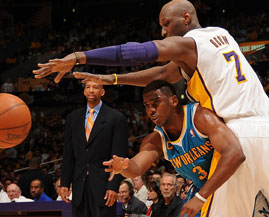 Rumors have been floating around all day about the Hornets having a deal with the Lakers for Chris Paul. According to Yahoo!, the rumors are now very close to becoming real: “The Los Angeles Lakers are nearing an agreement to acquire All-Star point guard Chris Paul in a three-team trade that will cost them Pau Gasol and Lamar Odom, league sources told Yahoo! Sports. The Lakers are finalizing the trade with the New Orleans Hornets and Houston Rockets. Under the terms of the deal, the Lakers would send Gasol to the Rockets. The Hornets would receive Odom, Rockets guards Kevin Martin and Goran Dragic and forward Luis Scola, league sources said. ‘It’s not finalized, but we’re close,’ one front-office official involved in the negotiations said.”

UPDATE: The deal is off.