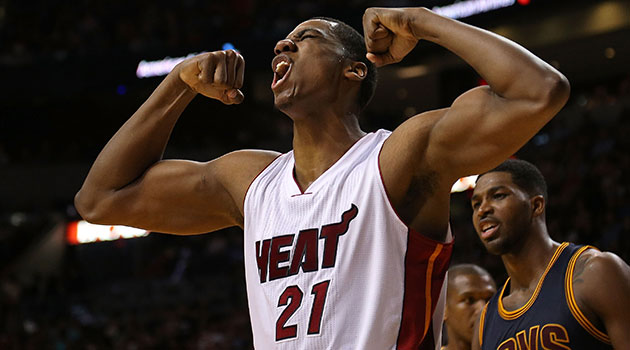 Throughout their illustrious history, the Los Angeles Lakers have coveted dominant big men and some of the best in the game’s history have made their way to Hollywood at one point or another. Wilt Chamberlain, Shaquille O’Neal, Kareem Abdul-Jabbar, and to a lesser extent, Dwight Howard and Andrew Bynum have all donned purple and gold.

This summer, the Lakers will reportedly go after another big man as they will “aggressively pursue” Miami Heat center Hassan Whiteside. The 26-year-old averaged 14.2 points, 11.8 boards and 3.7 blocks per game in 2015-’16.

Like most teams, the Lakers have cap room. And they are reportedly trying to spend it on free agent Hassan Whiteside, who appears ready to field their offer.

On Friday, Whiteside posted a cryptic message on Snapchat, “I’m a businessman that plays basketball.” Saturday afternoon, ESPN reported that the Lakers plan to aggressively pursue him when free agency begins.

Whether this would be a good move for the Lakers is unclear. Los Angeles needs a center, but it needs help in a lot of places. Whiteside is a talented shot blocker and rim protector, but he’s been far from a model of consistency. He’s also had problems staying healthy. He sat out most of the second-round series against Toronto with a knee injury and he played only 48 games in 2014-15. Overpaying injury-prone players is part of what got the Lakers into this mess in the first place.

Then again, beggars can’t be choosers. The Lakers went 17-65 last season, and while prized rookie Brandon Ingram and talented second-year standout D’Angelo Russell present hope for the future, the team as currently constructed is a long shot for the playoffs. The lure of the championship banners, the history and the purple and gold may no longer be enough to score a meeting with superstars, let alone sign them. That the Lakers no longer have false hope might be good for their future, as they can move on to more realistic targets.