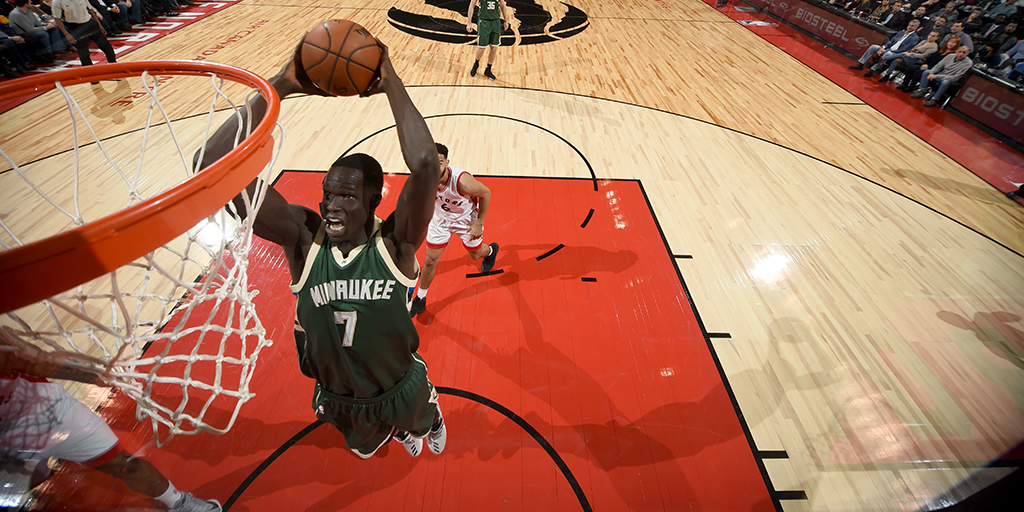 President Trump signed an executive order to suspend immigration from Iran, Iraq, Syria, Sudan, Libya, Yemen and Somalia, which reportedly prompted the NBA front office to reach out to the State Department for a better understanding of how the order will affect its foreign players. Los Angeles Lakers forward Luol Deng and Milwaukee Bucks forward Thon Maker were both born in the Sudan before moving out of the country as young children. Though they were born in the Sudan, Deng and Maker identify as South Sudanese. The South Sudan became an independent country in 2011 and is not included in President Trump’s travel ban.

Before a federal court in New York issued a ruling to suspend Trump’s order to ban, NBA spokesman Mike Bass issued a statement saying: “We have reached out to the State Department and are in the process of gathering information to understand how this executive order would apply to players in our league who are from one of the impacted countries.

“The NBA is a global league and we are proud to attract the very best players from around the world.”

The NBA has several global initiative programs, including Basketball Without Borders, that recruit, develop and invest in Sudanese players. Several top Sudanese players are attending American high schools and colleges on visas and could become NBA draft picks.

The Bucks played in Toronto on Friday night and the Bucks were reportedly concerned that Maker would have problems getting back into the United States. Maker made it safely back to the States and the organization’s Senior Vice President Alex Lasry sent out a series of tweets regarding Thon:

I appreciate all the fans concerns and prayers for Thon. And, today a Sudanese refugee who fled oppression and is an incredible young man 1/

will make his second NBA start. I'm incredibly excited and proud of him. He's a symbol of what makes America great and all immigrants 2/

believe about America. But what's going on in US right now isn't about Thon. It's about all the other incredible immigrants and refugees 3/

who will make US a better place that can't come into our country. This is not who we are as a country and doesn't live up to our ideals 4x

Sorry and let me continue by saying what Trump says about immigrants and refugees just isn't what I see. I see incredible ppl who come here

To create a better life for their families. It's why my dads family came here from Morocco.