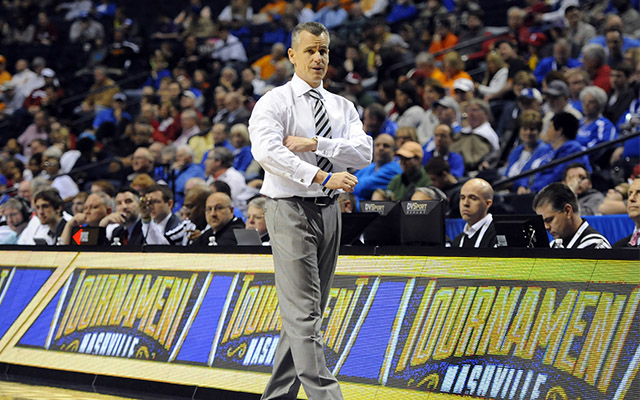 As they begin their hunt for their own version of Brad Stevens, the OKC Thunder are reportedly looking towards the college hoops ranks.

RT @BryanNix @DarnellMayberry I just heard from a Duke donor that KD met with Coach K.

According to ESPN, the Thunder front-office and Florida Gators head coach Billy Donovan have “formally commenced discussions.” OKC recently fired Scott Brooks after failing to qualify for the postseason; he had been on the job for seven years.

Within NBA coaching circles, Donovan is widely regarded as the clear favorite to succeed Brooks, who made one trip to the NBA Finals and two other trips to the Western Conference finals in his seven seasons as Thunder coach. […] Donovan is the first known candidate to talk with the Thunder about the job. It was not immediately clear how many other candidates, if any, Thunder GM Sam Presti plans to sit down with.

(Donovan) also has a very close with relationship with Presti, who has hired two members of Donovan’s staff at Florida within the past 12 months to take positions with Oklahoma City — Mark Daigneault as coach of the Thunder’s D-League team and Oliver Winterbone as a data analyst. Donovan and his family are very entrenched in the university community after his nearly two decades as the coach in Gainesville. Leaving those ties and the college basketball kingdom Donovan has built there, for faraway Oklahoma City, is believed to be the biggest hurdle that could prevent the Thunder from ultimately hiring Donovan, who resisted serious interest this time last year from the Cleveland Cavaliers and Minnesota Timberwolves despite his well-known ambitions for coaching in the NBA someday.”

But for what it’s worth, it doesn’t seem like Presti is asking his stars for their opinions: