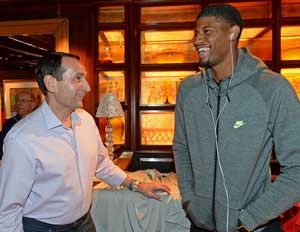 Reading ‘Paul George’ and ‘USA Basketball’ in the same headline after last summer’s injury can make a fan’s heart race a little. But this year, George’s name is in the news for other reasons.

After attending a team meeting with the USA Basketball squad earlier this week, George has reportedly been excused from the remainder of the mini-camp in Las Vegas. Via ESPN:

“Indiana Pacers forward Paul George has been excused from the rest of this week’s USA Basketball minicamp after spending Monday with the team, according to USAB sources.

Sources told ESPN.com that George attended both a team meeting Monday night as well as a one-on-one sitdown with Team USA coach Mike Krzyzewski, thus satisfying a mandate from USAB managing director Jerry Colangelo that any player who wants to be considered for the 2016 Olympic team must show himself in Vegas.

But sources say George — who was always expected by USAB officials to sit out this week’s two light workouts as well as Thursday night’s intrasquad scrimmage — was spared the chore of being forced to watch Tuesday’s noncontact session from the sideline and then face the media hordes in attendance.”