Report: Pittsburgh, Syracuse to the ACC? 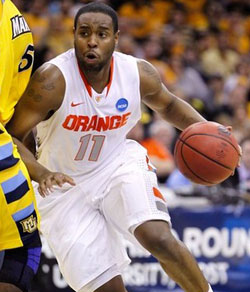 The powers are re-aligning in college basketball, and according to reports, they seem to be headed in the ACC’s direction.

A NYT story Friday night revealed that the ACC has been approached by at least 10 schools about possible membership. The Big East’s Pittsburgh and Syracuse have both tendered letters of application:

No one from Pittsburgh, Syracuse or the A.C.C. denied the conversations were taking place. Officials from all three entities declined to comment on the matter.

The discussions between the ACC and two Big East members are significant, as it appears the ACC is inching closer to becoming a 16-team super conference. Experts believe that if Syracuse and Pitt switch, the Big East won’t be able to overcome the loss.

ESPN reports that, “for schools to leave the Big East, they must pay $5 million and give 27 months notice.” That’s $15 million fewer than the ACC’s recently-upped $20 million buyout.

Syracuse, UNC, Duke, Pitt? That top four is wicked. Looks like the reigns in the college bball landscape could be handed back to the ACC once again.