Report: Rajon Rondo Did Not Receive a Playoff Share From the Mavericks 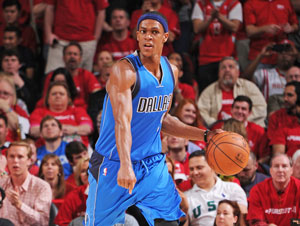 The news about Rajon Rondo and the Dallas Mavericks keeps on coming. According to Dallas Morning News reporter Eddie Sefko, Rondo didn’t receive a Playoff share from the Mavs, who were eliminated last night from the postseason by the Houston Rockets.

“The Dallas Mavericks conducted exit interviews on Wednesday and while many players said they chalked up the Rajon Rondo trade to a gamble that just didn’t work, their actions spoke louder.

According to multiple sources, Rondo did not receive a playoff share as the Mavericks divided up $208,940, their portion as a team that competed in the first round, but did not advance.

We’re not talking about a big chunk of money, by NBA standards. Assuming the other 14 Maverick players got full playoff shares, their take per person was $14,924.

It’s not unprecedented for a player to be excluded from the playoff pool A few years ago, Lamar Odom did not receive a playoff share when he parted ways with the team late in the season.”

Rondo’s woes with the Mavs might come to an end soon…but now the Lakers want the point guard only for a low-price.