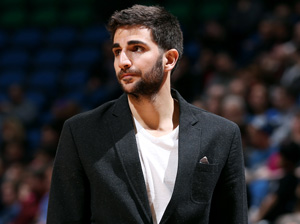 Ricky Rubio is expected to make his return on Monday night in the Timberwolves’ road game against the Dallas Mavericks. Although just last week it seemed his recovery would be prolonged due to muscle and ligament damage, a new report says we’ll be seeing the young guard back in action very soon.

“Rubio has been cleared to play on Monday against the Dallas Mavericks, a person with knowledge of the situation told The Associated Press on Saturday. The person spoke on condition of anonymity because an announcement has not been made.

Rubio has been out since severely injuring his left ankle Nov. 7. He will have missed 43 games because of the injury, and the Wolves sunk to the bottom of the league without him.

They are 8-38 entering Saturday night’s game against Cleveland. When he returns, the team plans to restrict his minutes until after the All-Star break while he sees how his ankle responds.

Rubio signed a four-year, $54 million contract extension before the season and helped the Wolves get off to a promising start before going down with the first ankle injury of his career.”