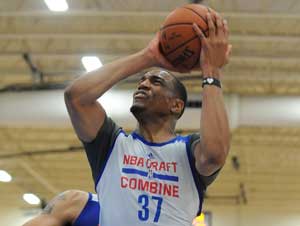 The Sacramento Kings reached a deal with undrafted forward Vince Hunter yesterday. The 21-year-old averaged 7 points and 5.5 rebounds for the Philadelphia 76ers in the NBA Summer League. More from RealGM:

The Sacramento Kings have reached agreement on a deal with undrafted UTEP forward Vince Hunter, including a partial guarantee, league sources told RealGM.

The two sides are finalizing the years on Hunter’s contract.

After going unselected in the June NBA draft, Hunter played for the Philadelphia 76ers in the Las Vegas summer league. The 6-foot-8 Hunter averaged seven points and 5.5 rebounds over four games for the 76ers’ entry.

In his final season as a sophomore at UTEP, Hunter scored 14.9 points along with 9.2 rebounds per game.