Report: Spurs ‘Near or at the Top’ of LaMarcus Aldridge’s Free Agency Wishlist 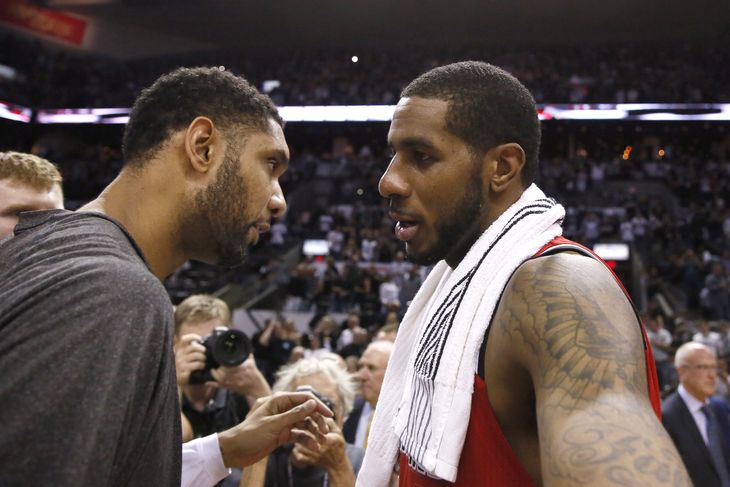 It’s going to be an endlessly fascinating (and rumor-filled) summer for LaMarcus Aldridge.

The 29-year old soon-to-be free agent recently said “we’ll see” when asked if he was likely to re-up with the Portland Trail Blazers.

According to ESPN, the Dallas Mavericks and San Antonio Spurs have a decent shot at landing the All-Star big fella during the offseason.

San Antonio, for what it’s worth, reportedly holds a slight edge over all other suitors:

But the consistent word on the personnel grapevine at the minute informs us that San Antonio and Dallas not only both believe they have a real shot at signing him but are also legitimately in Aldridge’s thoughts. […] Does Aldridge, even accounting for his Dallas upbringing, really want to go home to North Texas or down to South Texas, where he’d essentially be casting himself as the heir apparent to either Dirk Nowitzki or Tim Duncan? Wouldn’t he be putting himself in some awfully challenging circumstances to try to live up to the legacies of either of those certifiable legends?

Yet sources insist — at, yes, this early juncture — that San Antonio sits near or at the top of Aldridge’s list … unless the Cleveland Cavaliers were to lose Kevin Love and then somehow manufacture a way to sign-and-trade for him. […] The Knicks and Lakers, of course, also intend to enter the bidding. And there will surely be others.

The rumbles are out there, and thus impossible to ignore, that Aldridge is said to feel somewhat under-appreciated in Rip City because of the ever-growing focus inside and outside the organization on backcourt darling Damian Lillard. […] Combine that with the inevitable wanderlust that sets in after nine seasons in the same city — and just one trip beyond the first round of the playoffs in that span — and a top-shelf big man long presumed to be a lock to stay with the home team is suddenly in play.