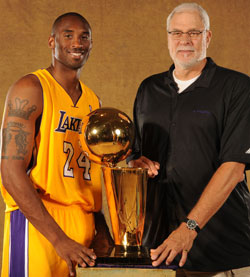 Phil Jackson to the Lakers could happen.

The Lakers have officially contacted the Zen Master, and “he’s interested in working for them again,” according to the L.A. Times. Dwight Howard reportedly wants Jackson and Kobe Bryant, Pau Gasol and others spoke highly of him at the Lakers blowout victory last night.

According to CSNBayArea.com, there’s a “strong” chance Jackson would return to the Lakers’ sidelines, if Jim Buss gives up power:

There is a scenario in which former Lakers coach Phil Jackson would consider returning for a third stint with the team, sources said late Friday, but it will require executive VP Jim Buss once again relinquishing the organizational reins – and this time handing them to Jackson, rather than back to GM Mitch Kupchak.

One source described the possibility of Jackson returning, should a suitable offer be made, as “strong.”

Mike D’Antoni, Jerry Sloan, Nate McMillan and Brian Shaw are possible replacements, but the signs are pointing more and more toward the Triangle Offense returning to L.A.