Report: Warriors Would Be ‘Significant Frontrunners’ For Kevin Durant 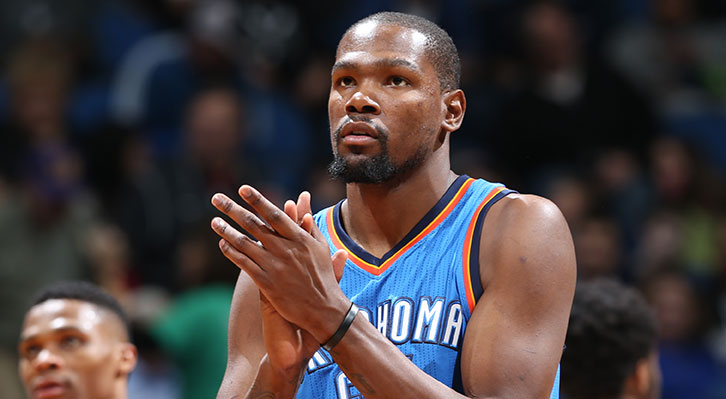 The Warriors have emerged as “significant frontrunners” for Kevin Durant should he leave the Thunder this summer, according to Adrian Wojnarowski of The Vertical.

According to the report, Draymond Green is on board with signing Durant and is expected to help recruit the OKC superstar this offseason. The Warriors would have to perform the necessary salary cap gymnastics, but it’s certainly possible for Golden State to sign Durant outright.

Durant is chasing a Championship, and likewise, Golden State thinks it can seamlessly add Durant to its winning formula.

The Golden State Warriors’ plan of pursuit predates their 2015 championship run, a bold plot to declare the futility of resistance. It isn’t only that the NBA champions are determined to recruit Oklahoma City’s Kevin Durant. The truth is that they’re the most intriguing destination to him. If Durant leaves the Thunder, the Warriors are the significant frontrunners to sign him, league sources told The Vertical.

Make no mistake: Durant isn’t close to gone in Oklahoma City – no decision, no leaning, sources said – but the real threats on the summer market are beginning to reveal themselves. Durant is determined to win – to be an immediate championship contender at 27 years old – and that keeps bringing him back to the Warriors should he make the decision to leave Oklahoma City.

Outside of a Thunder championship closing down the process before July 1, there’s a strong expectation that Durant will hit the road, tour campuses and become a recruit again.