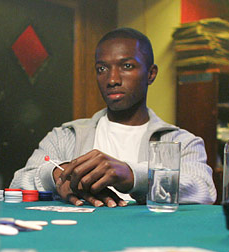 But, if you are ready, lemme lay out a few things that you might not be ready for. Get ready to go a season without McNulty’s insane antics to get under his bosses skin. He’s not even trying to get involved in the Marlo beef. Seems like the Barksdale case took a lot out of him. Be prepared to get a good idea of just how cold hearted Marlo and his band of outlaws are (they killed a rent-a-cop. Who does that nowadays? Really.) I hope you ain’t hoping for another hot sex scene starring Kima and some lucky woman. Lightning don’t strike twice when you need a spark like that lemme tell you.

Yeah, every season had something gangsta to offer to television. Season One we were introduced to a gangsta so gay that I bet the gay rappers (all 10 of them) have his posters all in they gym lockers. In season 2 the story arc with the cops, the drugs and the seaport was pure genius. Season 3 was straight gangsta. The shoot outs, the body count and they even went as far as killing my man Stringer. It kinda hurt me when they bodied him. He was an evil genius. If McNulty was trying to be Superman, trust that Stringer was Lex Luthor. Through the past few years The Wire became to the hood what Seinfeld was to the burbs – an entertaining glimpse into our own reality. Nah, this series prolly won’t ever win any awards unless BET gives it one, but the truth of the matter is, this show doesn’t need any award to define it’s worth to the culture that birthed it – hip-hop. This show is more hip-hop than the music is nowadays.

So much so that a few MC’s even guest starred on the series: Method Man and Fredro Starr.

But the truth of the matter is that this season of The Wire is my personal favorite. Everyone has they favorite season and this one is mine (Khalid will swear that the 2nd season is the best season of any TV show ever. Obviously he doesn’t watch The Simpsons)

But what made this season so real and appealing to me was the group of kids it focuses on and the damn near perfect picture the writers and producers paint when it comes to showing how easy it is to fall into the wrong things when growing up in an environment that would make anyone who isn’t strong willed constantly feel vulnerable. That aspect of the show was incredible. Not only because me and people like me can relate to it more than the next man, but because after a few episodes you start looking at these teens like your little brothers or cousins, na’mean? From parents with “different” aspirations for they kids (what woman can call herself a mother when all she wants if for her only son to become a drug dealing gangsta?) to drugged out parents – these kids know all about the breaks.

Besides the meat of the show, other entertaining pickles this season involve the rise of Marlo Stansfield, the race for Mayor (sounds boring, but it’s really not); the Board of Education’s lack of interest in their students, Prop Joe playing both sides of the field, ex-police officers redeeming themselves by become educators to students considered lost causes, and last but sure as hell not least, Omar. Talk about a rebel without a cause (him and James Dean shoulda got together and make a new age The Bird Cage) That man is the epitome of gangsta. Just a one man army taking on the governments of the world.

To put it plain and simple, this season is 5 Gangstas. Straight up and down.

We’re introduced into a slew of new characters that are just as interesting as the ones we already know. And not only that, but it’s definitely leading to an explosive 5th season. And the way things are going, the 5th could very well be the final season. Cause from the look of things, s*** is bound to hit the fan.

And just for the record, I was blessed with the opportunity to see this whole season before it even aired. And I was gonna keep quiet, but due to popular demand (from like three people), I’ve decided to give my opinion on this season without giving anything away. Man, I wish they’d put me on that writing team. I would make it my business to make it more gangsta than before. Is anyone at HBO interested in a real hood’s point of view? Holla at cha boy!