Rick Carlisle Rips Into OJ Mayo for Lack of Effort 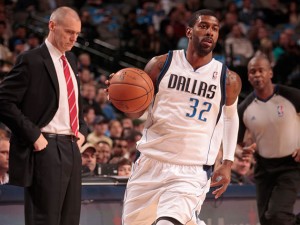 Dallas Mavericks head coach Rick Carlisle has not hesitated to publicly criticize OJ Mayo this season. And with the frustrating year coming to an end for the Mavs, Carlisle is still on Mayo’s case (which may have major implications this summer). Per the Dallas Morning News: “After the Mavericks’ 103-97 loss to Memphis at American Airlines Center, Carlisle noted that ‘some guys didn’t show, literally.’ Then he quickly zeroed in on Mayo. Playing against a Memphis team that allowed him to leave in free agency last summer, Mayo contributed twice as many turnovers (four) as points while shooting 1-of-6 in 28 listless minutes of court time. ‘He wasn’t into it the first half,’ Carlisle said. ‘We showed him some film at halftime where he was virtually just standing around defensively. We said, ‘Hey, we need you,’ tried to get him going a little bit. He just had a bad night; I guess I will write it off to that. But I will tell you what, if I was playing against my former team, I’d come out ready to go at them. But that’s just me.’ […] ‘I just want to see him show up and compete. He didn’t compete tonight. With all the time that we have put into helping him develop and bringing him along, for him, in the biggest game of the year, an opportunity to be a winning team, for him to show up like he did tonight I was shocked. Sometimes guys have bad nights so make sure and put that in there, too. Look, he’s not the only guy who stunk tonight. I stunk, too. I’ve readily admitted it all year. But I’m passionate about not wanting to stink. And that’s where I have trouble reconciling things.’ […] Mayo hurriedly dressed and left the locker room before reporters were allowed in, exiting out a back door.”