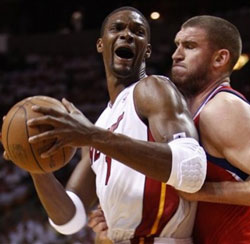 The Heat/Celtics match-up isn’t the most-anticipated series in Round 2 for no reason. Among the many storylines is which Chris Bosh will show up against Kevin Garnett and the Cs.

Doc Rivers and KG both know the Heat will be near impossible to beat in a best of seven if Bosh is playing on point, as he did in Round 1 against the 76ers.

Paul Flannery of WEEI has the report:

“The Celtics know all about LeBron James and they have dealt with Dwyane Wade in the playoffs before, but they will also be paying close attention to Chris Bosh in their conference semifinal series and for good reason.

‘When Bosh plays really well they blow teams out, Kevin Garnett said. ‘It’s not even close.’

The Heat may still win the series without Bosh going Beast Mode. But it’ll be tough Miami to lose is if he does.