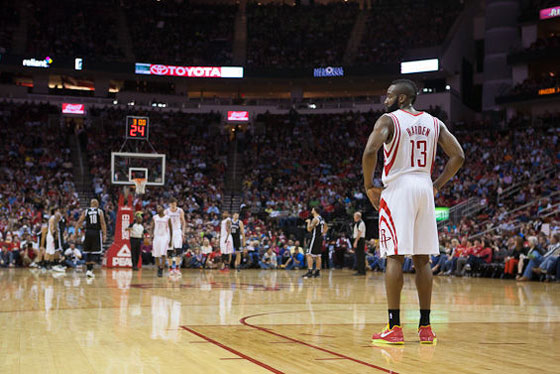 Houston Rockets All-Star guard James Harden has admitted that his defense can, “at times”, be pretty horrific.

But he’s not losing any sleep over it.

Rockets head coach Kevin McHale has told his star that he needs to step up defensively, and the GM Daryl Morey is mad at Internet folks who won’t stop putting together hilarious video montages of Harden’s laissez-faire approach to the defensive side of the ball.

“It’s not a matter of whether I can or can’t play defense,” Harden says. “It’s just a matter of me focusing for 48 minutes throughout a game and making sure that I’m always alert on both ends of the floor … It’s up to me to go out there and show my leadership, to show that I can play both ends of the floor at a high level and just do it. If I have that approach, we’re going to go a long ways.”

“I’m comfortable,” says Harden. “(The past few years), it felt like everything was just coming my way. From playing in the Olympics in ’12 to getting traded (months later) to not starting (while with the Thunder) to having my own team (with the Rockets) to Dwight (Howard) coming, it felt like everything was just falling in. […] But now that I feel comfortable, that I feel relaxed, now I can just sit back and think about what I need to do as far as being a leader. How do I approach the game? How do I approach being a star? Just take it for what it is and enjoy it. That’s all I can do, is enjoy it and have fun. Be yourself.”

“For whatever reason, it has taken on a life of its own,” Morey says about the criticism about Harden’s defense. “You’ve got people doing a 10-minute YouTube clip that everyone references, and I just ask anyone, ‘Take your worst 10 minutes from your job the last year and just take those worst 10 minutes and put them in a YouTube clip.’ I’m guessing it wouldn’t come out very well for anybody. That, to me, was completely unfair. That bothered me in a big way. Without context, you can grab 10 minutes of anyone and make them look like (expletive). I think reality TV proves that.”