Roy Hibbert Prepared for the ‘Challenge’ of Playing With Kobe Bryant 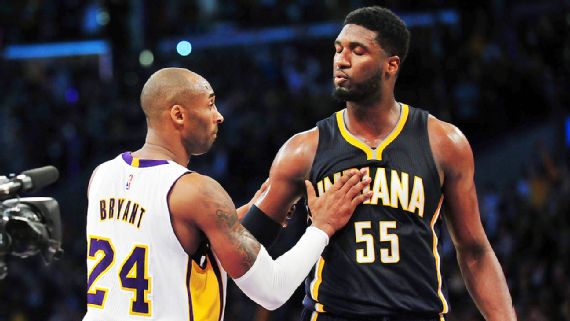 Kobe Bryant didn’t exactly offer the warmest of welcomes to new Lakers center Roy Hibbert, but the big fella says he’s unfazed by the “challenge” of playing alongside the relentlessly demanding Bryant.

Hibbert has already had a few run-ins with Kobe as an opponent, and doesn’t expect the five-time champion to go easy on him now that they’re suddenly co-workers.

With expectations in Los Angeles being ridiculously high as always, the maligned giant has shed quite a bit of weight and re-dedicated himself to becoming an elite defender.

But the center who stresses mindfulness will now be paired with Kobe Bryant, a player notorious for his killer mentality and demandingness of others. In November 2014, Bryant acknowledged how important it is for his teammates to assert themselves, “Because I don’t want chumps. I don’t want pushovers. And if you’re a chump and a pushover, I will run over you.” He said this June that he has made his own teammates cry, plural. […] Hibbert has already witnessed Bryant’s brashness first-hand. The center broke his nose while fouling Bryant in an early 2012 game. Not long after, Hibbert said on a podcast that he talked to Bryant “expecting a little sympathy, and I got none from Kobe.”

But Hibbert says he and Bryant have since cleared the air, and that he’s “excited” to play alongside him. […] “Just being able to play with a great [and] being pushed by somebody that has done it and won five championships. I’m up for a challenge,” Hibbert says. “People tell me a lot of different things, how he’ll respect me, and I feel like if I go about my business, I can get it done.”

“So,” Hibbert says before taking a long pause, “it’ll be a challenge. But I’m up for it. I’m not going to speculate on other people and how they interacted with him and their relationships, but I feel like if I put my best foot forward in practices and in games, I don’t feel like there will be any tension. And I’m the type of person that will be like, ‘Hey, if I did something, let’s talk it out,’ as opposed to just going back and forth every day.” […] An Eastern Conference executive was optimistic about the pairing. “I could actually see Kobe getting the best out of Roy,” the executive said. “I don’t think he’s ever been pushed before like he will be this next year. And it’s a contract year.”