Roy Hibbert Vows to Speak Up After Crunch Time Benching 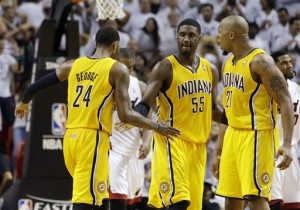 A disbelieving Roy Hibbert helplessly watched from the bench as James and the Miami Heat stunned Indiana in Game 1 of the Eastern Conference Finals — the defending NBA champions escaped with a 103-102 overtime victory.

After the crushing loss, Hibbert said that he and the Pacers can no longer afford for him to remain silent during such crucial moments.

“I’ve grown as a player, this is my fifth year and maybe I need to start talking up more,” Hibbert said in the losing locker room. “They pay me [max-contract money] for a reason. I didn’t say anything, and I wish I did. From now on, I need to speak up.”

Despite his understandable and considerable frustration with the crunch time benching, Hibbert — who finished with 19 points, 9 rebounds and 2 blocks — took some responsibility for his own poor play in spots:

“But I’m not going to put it all on coach,” Hibbert said. “I gave up some possessions, some offensive rebounds. We wouldn’t have been in that position if I had handled my business.”

Frank Vogel said that should a similar situation arise, Roy Hibbert will more than likely be on the court.

Having blown an opportunity to steal Game 1, the Indiana Pacers must get over their anger, and somehow recover from an absolutely devastating series-opening loss.