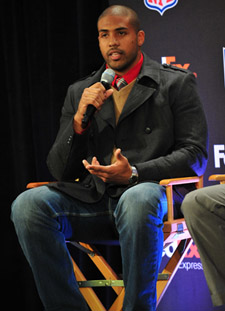 Houston Texans running back Arian Foster burst on to the scene last year, as the former undrafted Tennessee Volunteer emerged as the NFL’s leading rusher in just his second season. Given the current lockout, however, when he can start defending that title remains uncertain. With his extra free time, the Pro Bowler sat down with SLAM to discuss his hoop dreams, Kobe Bryant and more.

SLAM: Are you a big NBA guy?

AF: I wouldn’t call myself a big NBA guy, but I’m into basketball, yeah. I definitely thought, when I was 12 years old, that I was gonna be a point guard.

SLAM: What happened to that dream?

AF: I don’t really know. Your body starts to develop for the craft you’re intended to play. I started lifting weights, getting bigger and stronger, and guys in the League aren’t really that big and physical; so I’m on the court running guys over going to the hole, they’re calling charges and I’m saying, “They’re soft,” so I had to pick a lane.

AF: Yeah. I was talking to Glen Davis about it at the All-Star Game. He was saying guys in the NBA are running routes on the court, then I said we [NFL players] be in the locker room with a basketball, shakin’ and bakin’.

SLAM: So who’s the best hooper on the Texans?

AF: You’re looking at him.

SLAM: What about Andre Johnson?

SLAM: You had a chance to go to any Rockets games?

AF: Not yet, man. I’ve never really been a big Rocket fan. I know people in Houston don’t like that, but it is what it is.

SLAM: Do you have a favorite team?

AF: I wouldn’t say a favorite team, but I got a favorite player: Kobe Bryant. So I go for the Lake Show.

SLAM: Since you’re from Cali?

AF: I can’t say that’s where it’s from, because when I was growing up, I didn’t like the Lakers that much ‘cause I was a Jordan fan. I’ve never really had a team. I just love players and I root for the team the players are on.

SLAM: So you always root for players and not their teams?

AF: Yeah, especially now that I’m in the business of sports, it’s so hard to stay loyal to a team, ‘cause you know how unloyal a team is to a player. So I tend to stay loyal to players more than a team. I respect greatness in all walks of life. That’s what I see in Kobe: the passion that he plays the game with. It’s inspiring to watch. A lot of people call him arrogant, but I think they’re just insecure.

SLAM: How do you feel about the Big Three in Miami?

AF: They took a lot of flack for it and some of the vets were like, “Yo, we would have never done that,” but it’s a different era. You gotta do what you gotta do. I don’t think it diminishes any of their legacies. You got owners joining up, so why can’t players? People just aren’t used to players having so much control, so when players start taking the initiative, saying, “We can start our own dynasty and do what we wanna do,” people don’t like that.

SLAM: How does that compare to the NFL?

AF: Football and basketball are night and day. In the NBA, one player can totally take over a game and sway the outcome. In football, it’s so hard to do that as one player. You could have a good performance, but if the defense doesn’t play well, you still lose the game.