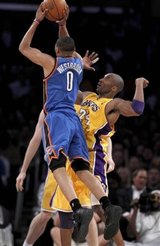 For four games, young Russell Westbrook had been running circles around Derek Fisher and jumping over the rest of his Los Angeles Lakers teammates, and as a result, the series was tied.

Prior to Game 5, Kobe Bryant walked into Phil Jackson’s office and simply told him, “I want to guard Westbrook.” A few hours later, the Lakers had OKC on the brink of elimination following a tremendous defensive effort (triggered by Bryant’s hounding of Westbrook).

With Kobe expected to guard Westbrook again tonight in Game 6, Russell wants to know (or at least, believe) that he’s not shook.

Kobe Bryant paid Russell Westbrook the ultimate compliment with his actions Tuesday night, when he stepped up and insisted on defending the Thunder’s young gun in Game 5. But you’d have to excuse Westbrook for refusing to return the same level of reverence with his words.

It’s absolutely the right attitude to have. Westbrook, like Bryant stated, is the Thunder’s engine on the offensive end. If he can’t get it going, the series will end tonight.

Kobe, even with all of his injuries, continues to believe he’s one of the best defenders in the world. Tonight, he’ll have another opportunity to drill this lesson into Russell Westbrook’s mind.