S. Dova to Coaches: ‘Get It Right on the Reserves’ 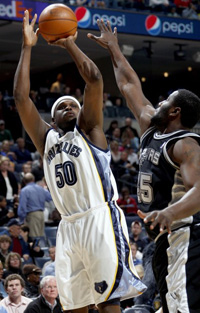 Okay, so the starters have been announced. Pretty much anyone who follows the L probably knows the lineups are pretty much the status quo. With the exception of AI, I have no complaints. LeNike James is undisputed; DWade is in the same category; Kevin Garnett hasn’t really had that great of a year (by comparison to his other seasons), but he’d be on the team, nonetheless, so that’s whatever; and “Superman” Dwight is the elite true center of the League, so bam. Steve Nash really deserves the starting nod this year, he’s been on fire; the former KB8 is a no-brainer; Carmelo has ascended into the elite and a premier forward; based on John Hollinger’s PER ratings, Timmy D’s has one of the best seasons of his entire career, so the other starting forward nod was his for the taking; Amar’e isn’t playing the center spot in Phoenix, not really, and though he’s really a borderline All-Star candidate (compared to the other candidates), he’s still in the game and it’s not an egregious spot for him–it’s fair.

Here lies the problem now–who’s going to fill out the rest of the rosters? All kinds of inductive reasoners will go and predict what is to come and whatnot. Before I say anymore, I detest the ideology that just because a team is winning big, that it means there should be multiple All-Star representatives for that team–that’s bogus and irresponsible; the “He’s A Perennial All-Star” card is also a major irritant for “superstars” that have off-years. The All-Star team is based on the premise that certain players of the appropriate annual campaign are above-and-beyond all others in the league on an individual basis. Certainly, if a player is putting up numbers on a bad team, that doesn’t mean that his play is necessarily better, but just because a team is well-off and there are certain standouts on the team that have contributed in a meaningful way, it does not mean they deserve the spot over other elite players. On the contrary, just because a player is a “star”, he shouldn’t be beyond being humbled if other players are better for that particular season.

I don’t want to be looked at as a hater, primarily because I’m from Ohio, but last year in the 2009 All-Star Game, Cleveland Cavs fans thought that Mo Williams was an “automatic” candidate for the game as a reserve. He was very good last year, but not a “shoo-in”; as those who followed know, he was included in the affair, because an injury, but otherwise, he was very good, just not primary All-Star material. Another memorable “shoo-in” was Paul Pierce in 2004, even though he was having an off-year and the Boston Celtics relatively sucked that year. Guess who got snuffed? LeBron James, one of the only rookies in league history that season to average 20-5-5 (next to Michael Jordan and Oscar Robertson)–LBJ was also playing as the full-time point guard. Paul’s team, in this instance, wasn’t playing too terribly great, nor was he, but the coaches played the “He’s A Perennial All-Star” card, and it was a horrible decision in my opinion–LeFranchise was so mad that he threatened not to participate in any of the festivities and with good reason.

Anyway, on to my reserve picks.

For the East, I have Joe Johnson of the Atlanta Hawks and Rajon Rondo of the Boston Celtics as my primary guards, Chris Bosh of the Toronto Raptors and Gerald Wallace of the Charlotte Bobcats as my primary forwards, and David Lee of the New York Knickerbockers as my No. 1 backup center; the other wild-card players on the East roster would be Joe’s main man, Josh Smith of A

tlanta, and Mr. Pierce from Boston.

Joe’s just manning people up this year and he has more help, which seems to be helping his game a bit; Rajon is finally putting it all together for the entire year and his confidence has shown in his play; Chris would be the ideal forward in the starting lineup if KG weren’t in his spot, and it’s notable, because CB4 is having a really good year for himself; Wallace is just proving that he’s an excellent wingman and the ultimate team clean-up man (he’s like an All-Star version of Jerome “The Junkyard Dog” Williams); D-Lee has improved steadily every year and with the Knicks in moderately serious contention for the Playoffs, it’s self-evident that he qualifies for All-Star status; J-Smoove has finally gotten smart and learned to play his position and it’s played off for the Hawks and most notably for himself; and while PP (no homo) has been slowed down for 2010, he’s been a guide dog for the Celtics and has been playing really good ball this year, enough to keep his spot as the perennial All-Star that he’s been.

Going to the Western Conference, my primary guards are Chris Paul of the New Orleans Hornets and Brandon Roy of the Portland Trail Blazers, the principal forwards are Dirk Nowitzki of the Dallas Mavericks and Kevin Durant of the Seatt-, oh yeah, Oklahoma City Thunder, while the converted center spot would go to Mr. Carlos Boozer of the Utah Jazz. The wild-cards would be power forwards Pau Gasol of the Los Angeles Lakers and Zach Randolph of the Memphis Grizzlies.

I’ve snubbed, if you will, Deron Williams of Utah and Chauncey Billups of the Denver Nuggets. In Deron’s case, it’s the same situation that he’s been in, where his comp is just so heavy, it’s hard for him to really get exhibition play in February, it’s as simple as that; there are so many great forwards that deserve the attention and the guards are significantly better or more consistently better. Chauncey is in a similar situation, and has had the same sort of thing play out when he was in Detroit, off and on (though it could be argued, reasonably, that he should’ve been on all of his years in the Motor City). Really, Deron is probably closer to Chauncey in that respect, a

CP3 is another no-brainer guard for the West, and he’s being a trooper while his team fights for high-moral mediocrity; B. Roy is being his great, consistent self and stepping up to the plate for the injured Blazers (even though he’s still punking out on the Andre Miller thing); Dirk is probably the MVP of the League not named LeBron R. James; Durant is probably the MVP of the League not named Dirk Nowitzki, whose name also isn’t LeBron R. James; Booz(e) has having one of those really great 20-10 seasons and giving the Jazz a real chance for contention in the Western Conference playoff pecking order; meanwhile, El Pau is the sole reason that Los Angeles is so great whenever he’s on the floor and rebounding the heck out of the missed balls, while Z-Bo is finally proving that he’s a team player while still putting up 20 and 10, and leading the Grizzlies (the Grizzlies, people) to a surprise winning season.

To conclude, NBA coaches, please do the right thing. I don’t wanna see a bunch of good-but-not-outstanding Hawks make the team. I don’t wanna see four Celtics on. I care not to see any more arguments about Mo Williams making the team or how guys should be rewarded for being the best Robin on a team full of Robins and just one Batman. The NBA All-Star Game is a real-life, on-court Justice League of America–all all-powerful heroes, no Teen Titans.