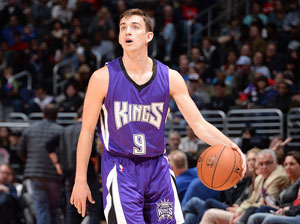 The Sacramento Kings signed David Stockton, son of the legendary John Stockton, through the 2015-16 season earlier today. Read more on the deal from the Kings‘ official media release:

“The Sacramento Kings announced today that the team has signed David Stockton through the 2015-16 season. The Kings had previously signed Stockton to a 10-day contract on February 20.