San Antonio Spurs Continue to Carve Up the OKC Thunder 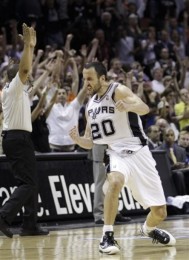 That the San Antonio Spurs own a commanding 2-0 lead in the Western Conference Finals over the OKC Thunder isn’t exactly shocking. The Spurs were the favorites, after all. What is surprising, however, is how easily San Antonio has handled OKC.

The Spurs once again displayed their beautifully unstoppable ball movement last night, getting endless open looks against the helpless Thunder defense. And even though OKC did manage to briefly make the game close thanks to a furious second half rally, the outcome was never really in doubt.

The Spurs ran a clinic at AT&T Center, their offense nothing short of perfectly synchronized en route to a 120-111 victory and what is likely an insurmountable 2-0 lead in the best-of-seven Western Conference final. All credit to the men driving the machine. But the Thunder seemed so befuddled on defense, especially in the third quarter that turned the game and the series for good, that for a time it became an embarrassing lack of effort. The way they didn’t challenge several 3-pointers, the way San Antonio flowed through the lane, it is hard to remember a time the Thunder looked so out of place and so defeated. Oklahoma City allowed 96.9 points in the regular season and 92.8 the first 10 playoff games. The Spurs had 92 at the end of the third period.

“They were making shots,” Thunder coach Scott Brooks said. “I mean, they were spraying them all over the floor and knocking them in. I thought (Kawhi) Leonard was making the shots. (Manu) Ginobili made a lot of tough shots tonight. (Tony) Parker was on fire … I like the guys’ mental toughness. It’s one of the things we’re good at. We are young, but that’s not an excuse. We play hard. I knew we were going to keep playing for 48 minutes. We got down 22 points. That’s not good. But we still came back and fought.”

The Thunder now travel home for Games 3 and 4, and looking to snap the Spurs’ stunning 20-game winning streak.

The only encouraging sign for OKC is that they were able to muck up the contest last night, mounting an impressive comeback in the process — for a little while, anyway — but as Kevin Durant pointed out in his postgame comments, this is no time for “moral victories.”