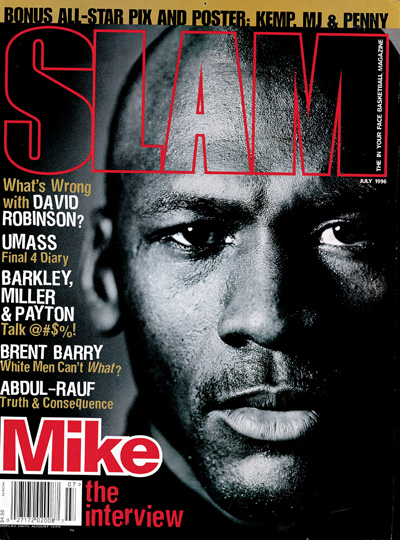 The 6th Man: Sometimes this thing just writes itself. Other times, I feel like using my AmEx on one of those “term Paper Blues” ads in Rolling Stone. My dilemma is that there are always a million things to cover, most of which you couldn’t care less about. The Knicks are a trainwreck. BFD. Rick Pitino should do the Pat Riley-thing in Orlando next season. Yawn. How could the league allow this jumpin’-out-of-bounds-while-simultaneously-callin’-time-out? Ho-hum.

I’ve exhausted my Reggie Miller rants and, as one reader reminded me recently, no one cares about me being slow and white anyway.

So I watched the Bulls-Magic game the other day and tried to think of a Sixth Man topic with some real substance. The issue we just finished has plenty, from Brent Barry to Mahmoud Abdul-Rauf to a David Robinson story that’s gonna piss some people off to a Mike interview that won’t. Then inspiration appeared before me. Out of the blue. During a TV timeout no less. I called my boy the Milster.

“That Nike commercial with Penny and Li’l Penny-Nick Anderson is sitting there, reading SLAM!”

“Yeah, I saw it. I like it when Nick throws it down on the table.”

“Thanks. What if I write the Sixth Man about seeing my magazine used as a prop in a Penny commercial? Does that have any substance?”

“Hey man, think about it for a second. It’s important.”

“Okay…No, that has no substance.”

“Well, let me ask you this: don’t you think that kind of shameless self-promotion is, like, beneath you?”