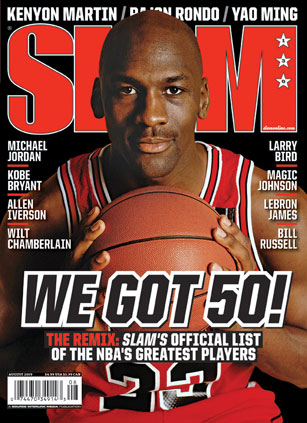 About eight Fridays ago, an editorial meeting took place at the SLAM Dome. The task at hand: creating a “50 Greatest Players of All-Time” list. Yeah, we’ve done it before, in both SLAM 19 and a special “Top 75” issue that came out in 2003, but a lot has changed since then. A whole generation of ball players—SLAM’s generation of players, really—has played enough seasons and collected enough stats to now be included in the “Top 50” convo. Da Kid, The Answer, Black Mamba—the list goes on. So when the opportunity to remix and remaster our lists of old arose, we just couldn’t resist the temptation.

Creating the concept was pretty easy, agreeing on the 50 was not. One Thursday afternoon, we sat around a conference room table for hours, poring over stats, ratios and all kinds of graphs. But, at the same time, we tried our best not to turn NBA greats into heaps of digits and equations. At day’s end, throats sore from arguing players’ cases, I think we managed to keep our respective perspectives while whittling the list down to 50. Now I don’t think everyone will be happy. Some Hall of Famers were left out, and some players on the list may surprise you (Dennis is my only hint). But at the least, this list is damn well thought out—and no one was omitted by accident. Thanks to Ben, Lang, Susan, Ryne, Khalid, Russ, Konate, Matt and others, the list was finalized, and the result is this cover and accompanying feature included in the issue, which boasts well-written pieces on all 50 players. It should serve as the perfect basketball edutainment, served up at the perfect time: the NBA Finals, when the greats solidify their legacies like Mike did six memorable times.

If you read SLAM (and why would you be here if you didn’t?) then you know that the cover choice was obvious. Mike is to modern basketball what Jack Dorsey is to the Twitter. That is, he created it as it exists today. Michael Jordan is basketball. Period.

Now MJ has been out of the game for a while already—has it been six years, and 11 since his last year as a Bull?!?—but his impact hasn’t lessened. The difference between him and most—who are forgotten by the next TV-timeout—is like the difference between a masterpiece and a solid work of art: One piece, the decent piece, is respected and valued while it “plays,” but its value and peoples’ familiarity with it fades, decreasing incrementally over time. The other work of art, the masterpiece, it has all eyes in the room on it while it “plays,” and shows timeless resiliency afterward, increasing in beauty, value and fame long after the artist is gone. Jordan is that masterpiece—oh, and surprise, surprise, he’s our No. 1. Who filled out the rest of the list? Well you have to read the ish and find out. Folks in the Big Apple, you should see it by Friday. Rest of the country and subscribers, next week. We’re a little early but you all know we like to get the buzz going. Plus, this place will be in serious Finals mode by Thursday so we figured we’d start the MJ hype early.

Between bouts of bickerin’ in the Dome over the “Top 50,” we still managed to find time to give paper nods in this issue to the streets (Booger Smith), the latest news (Jeremy Tyler), the Draft (Jordan Hill) and the NBA Playoffs (Ben Gordon). Between all that and more, Issue 130 should have something for everyone.