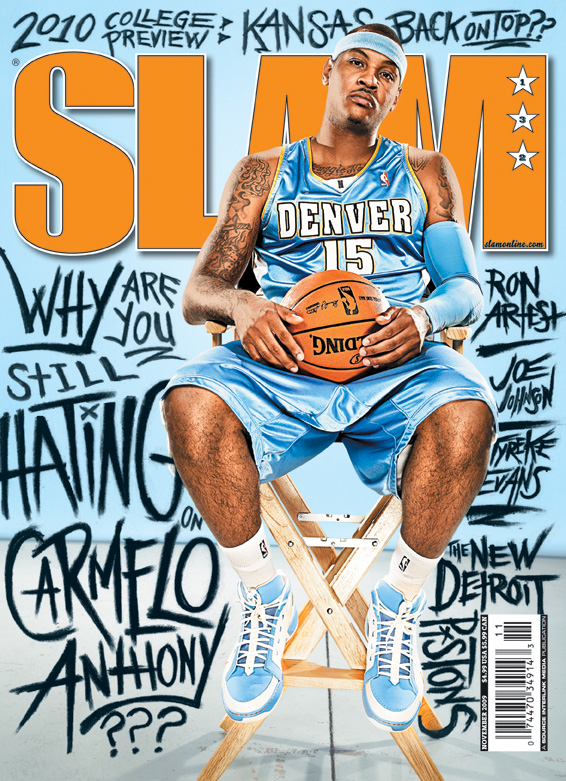 The last time Carmelo Anthony was on a solo SLAM cover was SLAM issue 105, back in the Winter of 2007. He was playing great, the Nuggets were looking up, and it seemed like it was time to highlight how he was finally growing up a little bit. The day we got copies of that issue into the SLAM office, the Nuggets were in NYC, so I went down to the Garden to give Melo a few copies. I had dinner plans that evening and couldn’t stay for the game, so I swung by for the pregame. Gave Melo some issues, caught up with him for a minute, told him to keep playing well so we’d look smart, and then I headed out for dinner. A few hours later, Carmelo punched Mardy Collins and got a 15 game suspension, just in time for SLAM 105 to hit newsstands.

Figuring out a SLAM cover isn’t an exact science. We try to mix it up between the LeBrons and Kobes and Wades and the guys who’ve never been on a cover before, like we did with college kids like Kevin Durant and Derrick Rose. And in between, every once in a while, we have the chance to highlight a guy we feel everyone else is sleeping on.

Six years into his NBA career, Carmelo Anthony is still only 25 years old, and he’s already fourth on the Nuggets’ all-time scoring list. Last season, with Chauncey Billups replacing Allen Iverson in the attack, the Nuggets became one of the most rabid defensive teams in the NBA. They tied a franchise record with 54 wins, and the Nuggets advanced to the Western Conference Finals for the first time in two decades. Carmelo is the best player on a team that was two wins away from making the NBA Finals last year.

But still. For a guy who’s never averaged less than 20 ppg in the NBA, never not been to the postseason and has a gold medal around his neck, Carmelo Anthony has been remarkably overlooked as a basketball player for a long time. He is very aware of this, and he plans on doing something about it.

When Melo was a rookie, I helped him write his SLAM Rookie Diary each month. This was before texting, and getting him on the phone each month was not an easy task. But the more we spoke, the more Melo and I got to know each other, the more he was willing to speak to me. Since then, I’ve been wanting to do a Q&A with Melo in SLAM, because I hoped he’d be comfortable enough with me to talk about a lot of stuff you don’t hear Melo talk about very much.

When we were setting up the SLAM 132 cover shoot, one of Melo’s ideas was to have him in a director’s chair. Melo thought that this would be representative of the changes he’s made in his life the last few years, of how he is now directing his life as opposed to just going along for the ride. While I appreciated the sentiment, and that Melo was actively putting thought into our cover shoot, I explained that shooting a cover is a very difficult thing to do. Between the word “SLAM” across the top and the cover lines down the sides of every cover, there’s not a lot of room to work with. And with the little rectangle of space that’s available to work with, it’s increasingly difficult to do something different.

Anyway, we reached a compromise: We’d get a director’s chair and we’d shoot Melo in it, but I made it clear there was probably no way we’d be able to use it for the cover.

After the shoot, back in NYC, we started looking at photog Paul Aresu’s images and…well, guess what ended up on the cover:

Once we settled on that cover shot, our creative team of Melissa Brennan and Steven Goggi went to work and crafted a very cool cover. There’s plenty of great stuff in SLAM 132 besides the Melo story, including interviews with Charlie Villanueva and Ben Gordon, Rajon Rondo, our college preview and the debut of our newest Rookie Diary keeper, Jonny Flynn.

We did the Carmelo shoot out in Denver about a month ago, and I went out there for a day to hang with Melo my man. The story in SLAM 132 covers everything from the AI/Billups swap to the Nuggets’ recent renaissance to Melo’s leap into the upper echelon to what it was like growing up without a father and how that informs his relationship with his son, Kiyan.

While Melo and I were talking, we got around to all of the other stuff Melo does, from making movies (his Krossover Entertainment produced the great Tyson documentary last year) to, more recently, dabbling in the music business. I asked him what he gets out of being involved in those fields…

MELO: To be able to put my creative thinking into a film or a documentary, you can’t beat that. It’s easy for me to just go out there and ask people what their ideas are or what they have going on. But I’d rather give my own input, and sit with a good writer or a good director and come up with a plan. And that’s something that seems to work for me.

SLAM: And you’re also in the music business…

MELO: I try to stay in the background more with that. Athletes get stereotyped all the time, because we only can do one thing — we can only play basketball. So we get stereotyped. I can’t work for SLAM? I can’t be a photographer? I hate when people say that. You know what? We do sh*t too! You didn’t know me before I started playing basketball. You don’t know what I wanted to grow up to be when I was a kid in school.

SLAM: What did you want to be?

MELO: Every time that question came up at the beginning of the school year, I never answered, because I didn’t want to be nothing. I just wanted to graduate from high school. I wanted to run around, I wanted to be outside, just chilling on the steps, seeing what’s going on. Not doing anything, just being there. I never walked around saying, I want to be an NBA basketball player! I watched the NBA, I had favorite players. Bernard King, that was my favorite player. No disrespect to MJ, because that’s God, but Bernard King was my favorite player.

SLAM: It’s funny you mention Bernard King, because he was always so overlooked…

SLAM: And you get overlooked a lot, too.

MELO: Well, I’m back. I’m back. I think the only reason I was being overlooked was because I went to the Playoffs and got eliminated in the first round five straight seasons. And then you see D-Wade win a Championship, then you see LeBron take his team to the Finals, and it’s like, OK, where is Melo? Last year when we got to the Conference Finals, I think people realized, Melo is finally where he’s supposed to be.

MELO: I mean, I don’t like saying I’m back, because I didn’t go nowhere. But I’m back, baby.