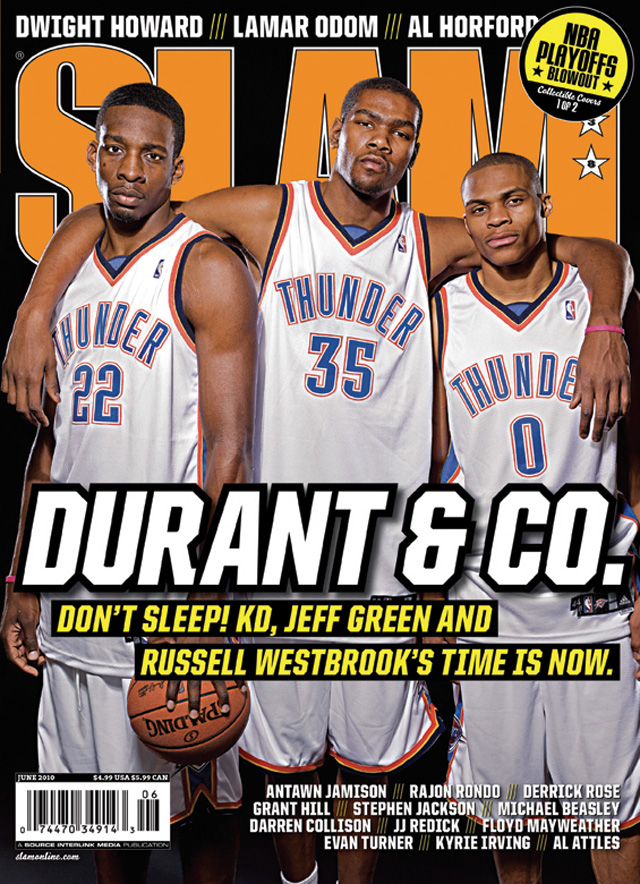 I have now been working at SLAM magazine for nine years. The first issue of SLAM that I worked on featured Tracy McGrady on the cover. If that doesn’t make you realize it was a long time ago, consider that it was McGrady on the cover in his first photo shoot wearing an Orlando Magic uniform. Since then I’ve performed various jobs here and there, written almost two dozen cover stories, about 100 features and produced more words for SLAMonline than I can possibly even begin to count. Despite having done pretty much all there is to do with SLAM, there always seems to be something that hasn’t been done.

And so today, hell freezes over. This is not an April Fools Day joke. The Atlanta Hawks are on the cover of SLAM magazine.

A few months ago, when the Atlanta Hawks were off to their best start in over a decade, there was a 48 hour period when I got calls from three different people pitching the Hawks as a possible SLAM cover. I told all three of those people the same things:

1) Yes the Hawks are playing well, but let’s see if they can keep this up.

2) Believe me, you don’t have to pitch me to put the Hawks on a SLAM cover. You’ve got the biggest possible Hawks advocate already here at SLAM, working from the inside. If anyone here needs to be reminded that the Hawks could be a viable cover, it’s not me.

But I can understand why people may not trust me, may not believe me when I say that we here at SLAM do realize that the Hawks exist. This is because in the entire 16 year history of SLAM magazine, we have never, ever, never ever ever, not even once, had an Atlanta Hawk on the cover.

It hasn’t been for a lack of trying, at least on my part. Every story meeting, I’m the one saying, “Well, we could do something on the Hawks…” Problem is the Hawks haven’t been very good. Since moving to Atlanta from St. Louis in 1968, the Atlanta Hawks have not won an NBA championship. In fact, since moving to the Eastern Conference in 1970, the Hawks haven’t even made it to the Conference Finals. Between 1977 and 1999, the Hawks qualified for the Playoffs 18 times, and lost in either the first or second round all 18 times they made the Playoffs. And between 2000 and 2007, the Hawks didn’t even make the Playoffs.

But now the Hawks are balling. They may not be at that level with Cleveland or L.A., but the Hawks are currently one win away from their first 50 win season in over a decade. And as we were brainstorming who should be on the cover of this issue set to drop when the Playoffs start, our publisher actually came up with the idea for us to feature younger teams that could make some noise.

Picking Oklahoma City from the West was a no-brainer. Sure they’re young and talented and all that, but what they’ve accomplished in just two years is incredible. Anyone remember that it was just a little over a year ago that they started out 1-12? I think everyone recognized they were a talented team, led by probably the most talented young player in the NBA, but now they’re not only a Playoff team out West, they’re three games out of first in their division and on pace to win 50. Our main man Nima Zarrabi spent time with the Thunder when they were out in Cali a couple of weeks ago, and he wrote a great story that captures not only how well the Thunder players all get along, but also just how well the franchise is positioned going forward.

As for the Hawks…well, you get one guess who got to write their first-ever SLAM cover story. Actually, the way it worked out, because of our timing and the Hawks’, we shot this cover in New York City. The Hawks flew into NYC on a Sunday afternoon, the day of the Oscars. I was waiting for them at their hotel near Lincoln Center, and they all trudged off the bus and went upstairs to their rooms. A few minutes later Hawks PR director Arthur Triche came back down, and then Al Horford, then Josh Smith, then Joe Johnson. The original plan was that we’d take cabs down to the photo studio that photog Atiba Jefferson had rented on the Lower East Side, but the Hawks’ charter bus waited for us to give us a ride, so the five of us ended up taking a huge bus all by ourselves down to the studio. We got into the studio, Atiba started snapping, and AT and I played caterers by grabbing a couple of pizzas and sodas from a nearby pizzeria and bringing them back for everyone to chow on.

Since turning pro, Joe, Josh and Al all said they’ve never been on a magazine cover, so they were up for the shoot, and we all just kinda hung out for a few hours down there. I’ve spent a lot of time with all three of those guys over the years — including this year — but this was a chance to see them in a totally different setting, just chatting, telling stories, spending a lot of time laughing uproariously. I knew all these guys got along just fine, but it wasn’t until that night at the photo studio that I was convinced that these guys all honestly like each other.

Even though I love the Hawks, I know most NBA fans have at best politely endured them over the years. Meanwhile, I’ve voraciously inhaled everything there is to know about the franchise, so I wrote what’s basically an educational piece, with 21 (word to Dominique) things you need to know about the Hawks to truly understand this team should you want to board the bandwagon. From Woody’s eyebrows to Iso-Joe to Lon Kruger’s season ticket scheme to the 1988 Eastern Conference Semifinals, I summed up the history and the present of the Hawks. The only three people I really quote in the story are the three people who’ve been around the organization the longest: Dominique, Arthur, and Hawks radio voice Steve Holman, who’s in his 25th season with the team. Like me, they’ve seen it all, been through the bad times, and it’s because of those bad times that this current team is so special.

I don’t know how the Playoffs are going to play out, but I do know the Hawks, for the first time in forever, stand a fighting chance against pretty much anyone. And for a Hawks fan like myself, that’s all I can ask for.

Here’s both covers, the Thunder and the Hawks. These should be on newsstands around the world in the next week.