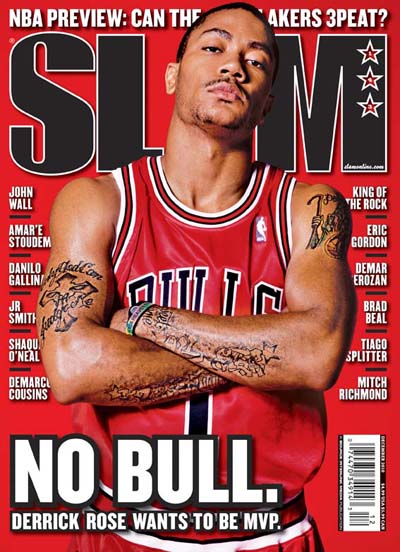 The 6th Man: For most of the last decade, we were forced to listen to and read a lot of noise about how the youth basketball system in this country is broken, how our top players are spoiled brats who wouldn’t know a bounce pass from a chest pass. Well, was anyone watching what happened in Turkey?! While world-class stars Kobe Bryant, Dwyane Wade, Carmelo Anthony, Dwight Howard and LeBron James (the latter three complete products of this country’s high school/AAU feeder system, incidentally) stayed home, the USA “B” Team rolled to a Gold medal in the FIBA World Championship.

Yes, Jerry Colangelo and Mike Krzyzewski deserve credit. And yes, role players such as Stephen Curry and Danny Granger went under the radar when they were in high school. But the bulk of the team-including pre-WBF cover subject Kevin Durant and this month’s cover star Derrick Rose, both of whom started all nine games in Turkey-epitomize the modern American baller. They were identified as major talents at age 14, sought after by sneaker companies at age 15, hounded by breathless recruiting gurus at age 16, fought over by colleges at age 17 and were millionaires before they turned 19. And guess what? These are two of the hardest-working, most humble cats in the NBA. And it isn’t just the US Senior National Team that is best in the world; did you know that all of Team USA’s men’s teams went a combined 44-0 in ’09-10, making the US the reigning champ in every age-level competition?

So, old school media and moralizing writers, why don’t you take on the NCAA for encouraging kids who may not even care about a college education to attend their insitutions? Or blast the NBA for its self-serving age limits and confusing Draft-entry rules. But whatever you do, stop talking shit about young men who do nothing more than work within the existing system to become the best players they can be.