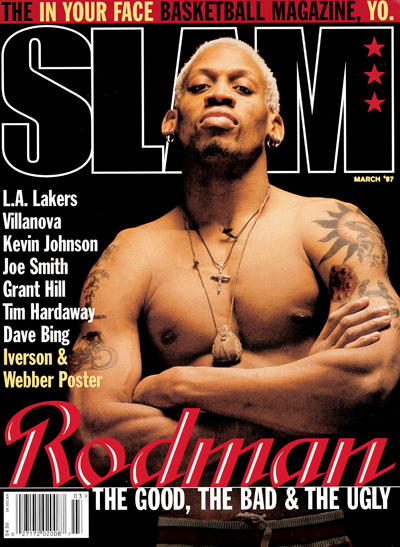 The 6th Man: I can go out to a salon and have my nails painted pink, and then go out and play in the NBA, on national television, with pink nails.-Dennis Rodman, Bad as I Wanna Be

I can go out to a salon and have my nails painted pink, but then I’d feel like a jerk, ’cause, after all, I’d only be doing it to get attention.-Tony Gervino, SLAM

I’ve always said that there are only three sure things in the SLAM Dome: 1) Russ’ lunch will contain bacon, 2) Reggie Miller will never be on a SLAM cover and 3) neither will Dennis Rodman.

Hey, I have my reasons for No.’s 2 and 3. For starters, as you know if you’ve read Sixth Man for the past two years, my feelings for Reggie Miller are pretty evident. (He makes me sick, yo.) The same goes for Rodman. And to this point, I’ve avoided running a big feature story on him, thinking that it would just glorify his obnoxious behavior. (Yeah, I know they did a story on him in SLAM #2, but I wasn’t working here then, so I’m not countin’ that.)

Recently, however, I realized something very important to the whole process:

Who cares what I think?

I mean, really the fact that I find Rodman so tiresome doesn’t mean that you do. And, judging from the letters that pile into the SLAM Dome every day, you don’t.

And so I finally caved in and decided to put Dennis Rodman on the cover with one stipulation: we were gonna tell both sides of the story good and bad, pro and con, whatever you want to call it. Basketball mags will write all day long about how Dennis Rodman’s the greatest thing since the Rockets cheerleaders (which, believe me, are a really great thing), but very rarely will they take an opposing viewpoint.

Whenever I say that I don’t like Rodman, folks always say, “Yeah, but would you want him on your team?” To that I respond: “Sure, if I could have MJ and Scottie Pippen-or, before them, Isiah, Joe D and Laimbeer-as well. Then maybe 16 rebounds and three points would be of some use.” But I won’t go any further down that road.

Oh, and one last thing: Don’t hold your breath, Reg.

P.S. Yeah I know I’m gonna get called every name in the book (and some too nasty to get into the book). All I can say is this, folks: Bring it on. Again, peace.