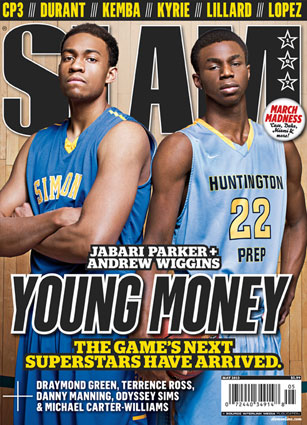 Every issue drop is exciting to me, but ones where we’re actually covering new ground are extra special. And I’d say the first big magazine cover for Andrew Wiggins and the first photo shoot and real time together for Wiggins and Jabari Parker qualify as a lot of new ground.

If you follow hoops and have an internet connection then you should know who these kids are. Parker is the Chicago native with the NBA bloodlines and mature-beyond-his-years game and disposition. He’s been in the hoop spotlight since he was about 14 years old and handled every challenge gracefully. Wiggins is the Canadian native with NBA bloodlines and more late-arriving cred, since he spent time in the Class of 2014 and has attended a few different high schools.

Besides the NBA genes, what these two have in common is high-level skills and a growing level of hype that have them both being seen as heirs to LeBron James. Neither is likely to do what LeBron has done as a pro (honestly, there will probably never be another LeBron), but they fit the bill as far as height, versatility and watchability as high school athletes.

Our own up-and-coming star, Assistant Editor Franklyn Calle, has a nice piece about the background to this shoot that you should read. After that, just look for this awesome issue—which also includes March Madness predictions, stories on collegiate standouts such as Michael Carter-Williams and Mason Plumlee, some sick All-Star Weekend photos and typically timely features on NBA studs like Kyrie Irving and Damian Lillard—on newsstands in NYC starting today and nationally (shoot, internationally) next week.