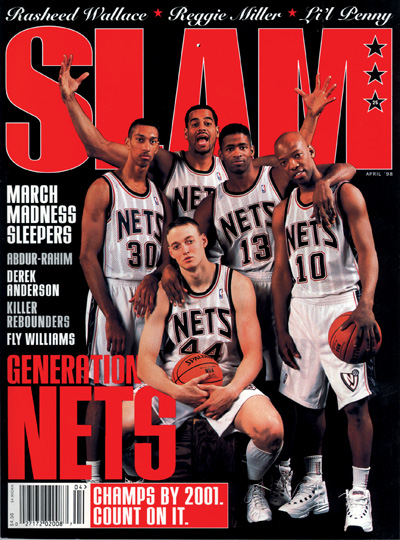 The 6th Man: The press release, brief and to the point, was faxed to me at 4:15 a.m. on February 5, ’98. It had no cover page and appeared to have been typed on a children’s typewriter. It read as follows:

“Nike endorser Li’l Penny, of Wake Forest, the Antananarius Lemurs (Madagascar League) and the Chicago Pro-Am, has written a lengthy manifesto concerning the abrupt cancellation of the NBA Dunk contest. He requests that any magazine which prints his comments do so in their entirety and without editing. (He spelled-checked the thing twice.)

“If you would like to join in the protest, Li’l Penny will be holding a rally on the steps of Madison Square Garden in NYC, site of the 1998 All-Star weekend, on Friday, February 6th at 3 p.m., in hopes of galvanizing public opinion. Please make signs and come ready to yell. He also asks that someone please bring him some peppermint Mentos and a grape soda. Thank you.”

I was speechless. I had just seen LP in Barbados not 10 days earlier, and he hadn’t said word one about any protest. Of course, by then he was on the final leg of his six-week quest to find the world’s dopest black sand beach. As a matter of fact, he was telling everyone by the hot tub about how his inclusion in the NBA Dunk Contest meant that, finally, as he put it, “the funk will be back in the dunk contest. It’s like that.” He had no idea whatsoever about 2ball.

Now, I’m not much for protests. The only time I’ve ever protested something in my life—true story—was when my high-school principal Mr. DiPalermo tried to ban concert t-shirts. (Hey, it was a major deal at the time.) I didn’t get him fired, and I suspected that I’d have similar trouble convincing NBA Commissioner David Stern to reinstate the dunk contest so that L’il Penny could show off his 118-inch vertical.

So instead of participating in the protest, I decided to watch it from across the street and bring along a photographer to chronicle LP’s lonely plight.

Well, seeing as there was no dunk contest at this season’s All-Star game, you can pretty much guess how the protest went. But, since we go so far back, I decided to print LP’s lengthy manifesto anyway, in hopes that by this time next year, we’ll be talking about how Vince Carter really turned it out at the ’99 NBA Dunk Contest.

Can the NBA do that for a brotha?