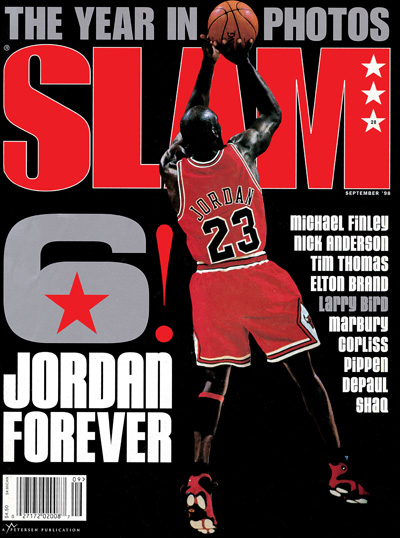 The 6th Man: The Jordan Show. Ever heard of it? Thought not. It’s this basketball TV show that follows the exploits of a superhuman basketball arteest named Michael Jeffrey Jordan. Thing is this: it’s fake. The team isn’t real, the coaches aren’t real and yeah, Dennis Rodman is nothing more than a highly paid actor whose sole purpose is to give “Michael Jordan”—at least we think that’s his name— a comic foil.

How did I figure this out? Well, to be honest, I’ve had a sinking feeling for the last few years that something was fishy. It all seemed so perfect: Here is this guy. From a supportive family. Great smile. All-American at UNC. ’85 NBA Rookie of the Year. Nice to kids. Parents. Grandparents. Talks the talk in the boardroom. Oh yeah, a guy who’s won six rings, with one-half the talent on his roster that those old Celtics and Lakers teams had. But what he had was worth even more—an unquenchable thirst for the big moment and an inexhaustable desire to come out on top. (Sounds too much like The Lou Gehrig Story if you ask me.)

Need more proof? Check out some of these improbable plot lines:

—On an ’82 UNC team filled with future NBA stars Big Game James and Sleepy Sam, Coach Dean Smith drew up a play where “Michael Jordan” got to hit the game-winning shot with a few seconds on the clock. As a freshman. (Yeah, sure.)

—Scored 63 against the Celtics in a 135-131 double-OT playoff game in ’86, many of them against Larry Legend himself. At one point in the third, “Michael Jordan” yelled “All day, baby. All day.” (Rumor has it that this was an ad-lib. What he was really supposed to say was “It’s that easy.”)

—In ’95, came out of “retirement” (a corny plot-device that attempted to bring “Michael Jordan” back to earth—you know, to make the character seem more human to the audience.) and scored 55 on the Knicks. Spike Lee made a cameo here as a howling, pained auteur. (At best, improbable. At worst, some hackneyed shit.)

—In the ’97 Finals, “Michael Jordan” was allegedly so ill he could barely walk. He looked green as he took the court in Utah and during time outs needed to be helped to the bench by six-time Best Supporting Actor Nominee Scottie Pippen. But just when things looked their bleakest, “MJ” managed to score 38 points, snare seven boards and dish five assists, all without his green makeup running. (A nice twist to an otherwise boring series.)

There are literally thousands more games where “MJ” was just a little too good to be true, and now that he may retire (again), the truth may never be known. Except right here. So I’m onto you, “Michael Jordan” or whatever the hell your name is. The jig is up. Now give me back my damn Roberto Clemente card.

PS. One more question: Where in the hell did they find the guy who plays “superagent David Falk”?