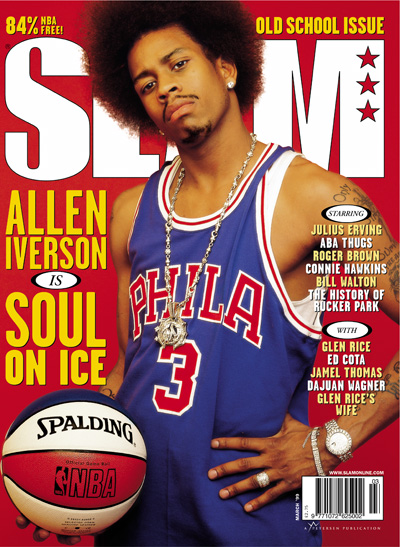 The 6th Man: It all started with the photo that you see before you.

We were lounging around, doing the usual Friday SLAM Dome activities—crank-calling Zo, deciding which question would end a Larry Bird interview the fastest, playing Pin the Tail on Hubie Brown’s moles. You know, napping.

We had been looking for a way to make sense of the NBA lockout beyond our troublingly ineffective Shawn Bradley protest, as well as a way to keep the magazine fresh—and all the while, the reality that no one really gives a rat’s ass what NBA players do in their free time was looming over us like a 2Ball hangover. We’d thought long, we’d thought hard. We were, frankly, at the end of our badly-fraying ropes, and so we barely noticed when the lightbulb popped on. With a ’fro, no less.

The Julius Erving photo, originally a potential poster, begat the idea for an old-school issue. We figured this was a great time to give some props to the older guys who helped create the billion-dollar business that’s currently being carved up like a Christmas ham. Of course, we couldn’t limit ourselves to merely old school; there was way too much currently happening in hoops to limit ourselves that way. Instead, we threw a few extra helpings of the historical stuff into the stew.

Peter Vecsey was of immeasurable help with his heartfelt Roger Brown piece, as well as lending us guidance—and a dope photo—for the Rucker Park story. (Peter: If you’re ever looking for a gig where you can be mean and use copius amounts of profanity in an insulting manner, give us a call.) And Connie Hawkins also helped us remember Roger and give him some of the credit he was so criminally deprived of when he was alive. On the complete other end of the spectrum, props to Iverson for going along with our idea to dismantle his braids, albeit temporarily. AI was actually pretty amped to re-create the mood of the Doc photo, and I think it shows.

Almost forgot: we’re finally running a photo of Christie Rice a.k.a. Glen Rice’s wife. We had no intention of doing so, but your cards, letters and bribes convinced us that you wouldn’t stop until you saw her. Now could you please stop buggin’ us and leave the nice lady alone.*

*Just in case my wife Gina is reading this.