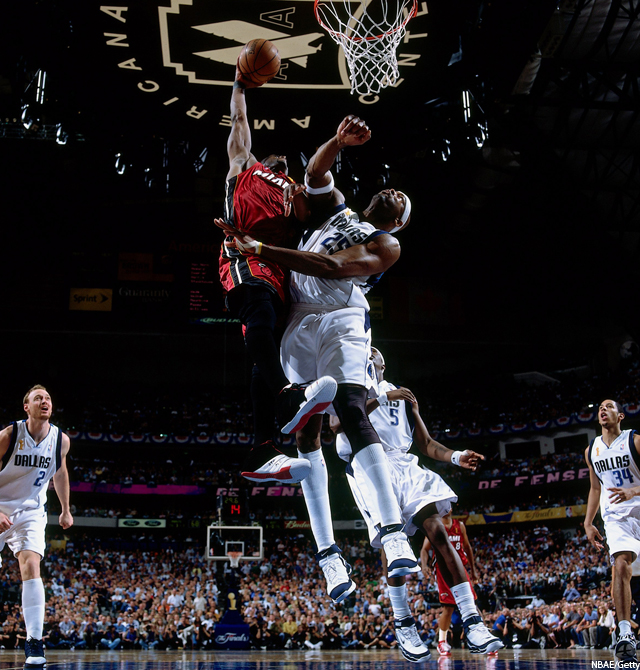 This was Dwyane Wade in Game 1 of the 2006 NBA Finals, a crazy highlight in the midst of a mediocre overall game that his team lost by 10. Yes, he scored 28 points—but he missed 14 shots along the way. Yes, he added 6 assists and 4 steals—but he also committed 5 turnovers and 4 fouls on the night. Our assumption, after this up-and-down performance in his Finals debut, and again after Game 2 (23 points on 6 of 19 shooting, 8 boards and 4 turnovers), was that highlights like these, coupled with too many missed shots and sloppy possessions, might come to define DWade’s first trip to the Show.

Our assumption was inaccurate.

You know how the rest of this year’s Finals went, Wade making a few thousand trips to the line, wetting off-the-glass 17-footers like his name was Timmy Duncan, and basically playing (and getting treated) like the superstar he clearly is. The surprising thing was that individual highlights like these were actually few and far between—none of those physics-defying, flailing backward layups like he dropped on Detroit in the Conference Finals—as DWade was way too busy hitting free throw after jumper after free throw en route to his first ring and the Finals MVP award. But there were a few, and this one in particular sticks out.

So what have we learned? That this kid is pretty damn good, except when he gets near the rim—in which case, he’s a bad man indeed.