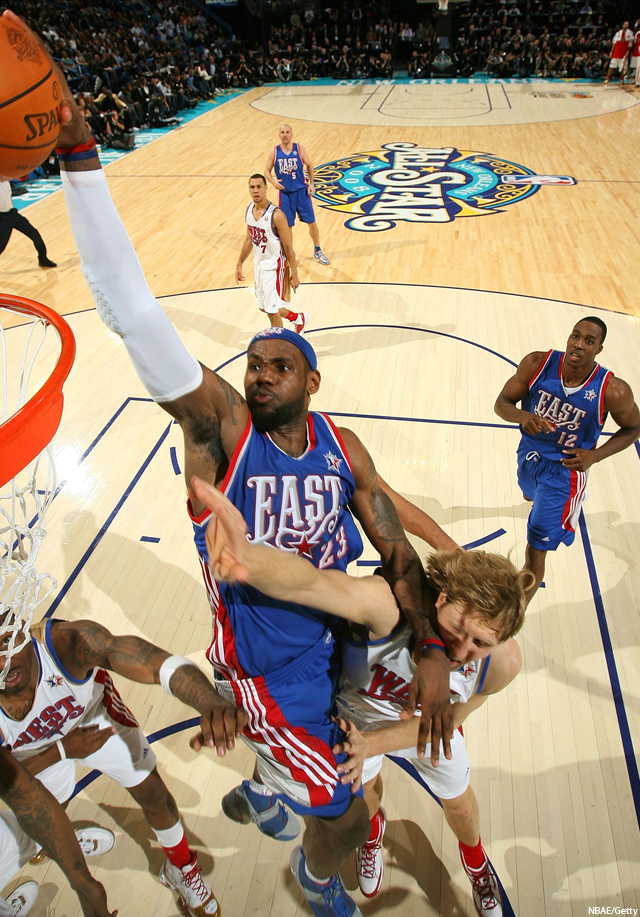 All in all, Dirk Nowitzki’s hoop life has been pretty good. Max contract, All-Star appearances, MVP. Not yet 30, he’s already the leading scorer in the history of the Dallas Mavericks franchise. OK, so his best friend left via free agency and, um, became a two-time MVP. And maybe the Mavs followed up one of the best regular seasons ever with one of the worst Playoff collapses. But hey, these things happen, right?

This year the Mavs saw fit to re-tool, adding all-world PG Jason Kidd from the New Jersey Nets. Ah, the perks of having a billionaire owner who doesn’t fear the luxury tax. The deal wasn’t officially completed as of All-Star Weekend, but that was just a matter of details.

All in all, LeBron James’ hoop life has been nothing short of amazing. At just 23, he’s already acquired all of Nowitzki’s accolades (except for the MVP, which should be his soon). Like Nowitzki, he led his team to the NBA Finals, and like Nowitzki, he lost. However, as of All-Star Weekend, when the best of the best gathered in New Orleans, James’ Cavaliers had done nothing to address their glaring deficiencies. And LeBron, a Hall of Fame player when content, well, he becomes something else when he’s angry.

The fact that Nowitzki got Kidd and LeBron didn’t may not have had anything to do with this dunk. Then again, what else could explain this type of crunch-time humiliation?