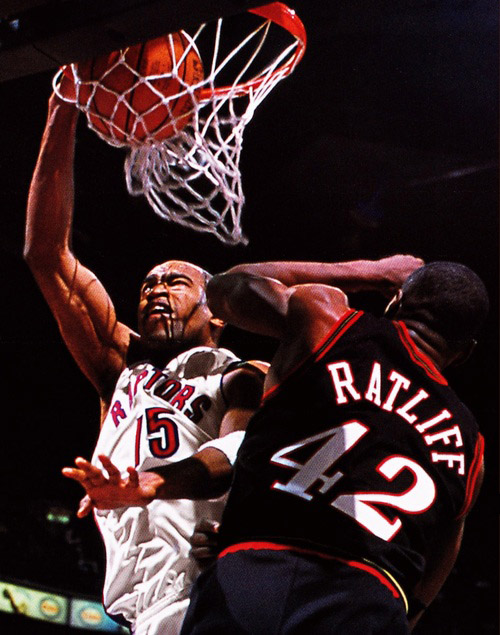 TORONTO—A spokesperson for the Toronto Raptors has confirmed that the team will wear black bands on its jerseys for the remainder of the season in memory of “all the people Vince has banged on.”

Following one particularly nasty dunk, in which Carter screensaverized Sixers’ shotblocker Theo Ratliff (“Who hangs posters anymore?” the spokesperson asked), the team began discussing how they should remember each of Vince’s victims.

“I thought Vince should have little portraits of each of them tattooed on his arms,” said backup point guard Alvin Williams, “but I realized he’d probably run out of skin after four or five games.”

Other proposals involved sending flowers to the unfortunates’ families (John Thomas), erecting a large granite monument just outside Toronto with each of their names engraved on it (Kevin Willis), or presenting surviving family members with car wash gift certificates (Charles Oakley). But Vince decided to that the black bands would be the best way to go. “This way I can honor them all without having to add something new each time,” Vince said. “That could get kind of tiring. Also, this way it’s retroactive, for all those guys I got before. You hear me, Rik?”

When asked if any opponents had suggestions, head coach Butch Carter just laughed. “[Sixers’ coach Larry] Brown said Vince should wear a 10-pound ankle weight for each of ‘em. I told him I’d think about it.”

“I don’t know,” said a still-dazed Ratliff after being informed of the tribute. “Flowers would have been nice.”

The spokesperson went on to deny rumors that Carter would be required to play barefoot with both hands tied behind his back to reduce the chances of the rest of the League getting completely embarrassed.