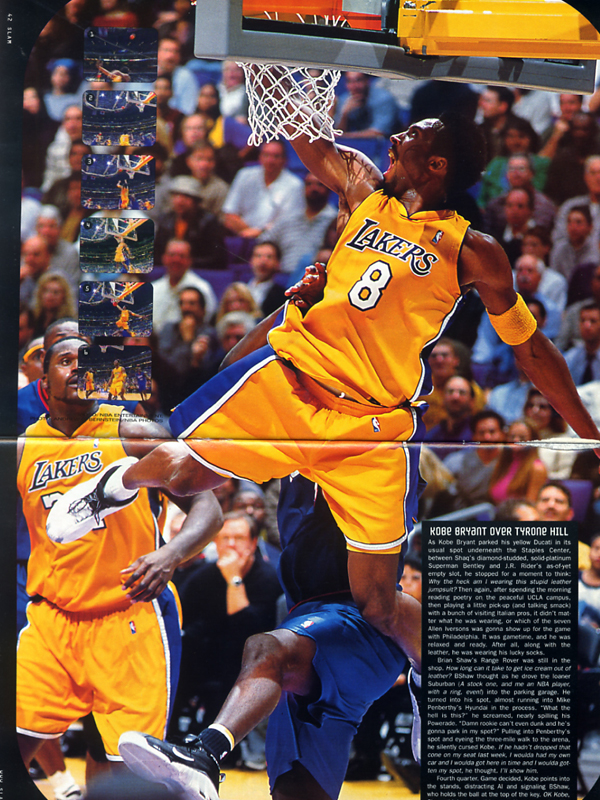 As Kobe Bryant parked his yellow Ducati in its usual spot underneath the Staples Center, between Shaq’s diamond-studded, solid-platinum Superman Bentley and JR Rider’s as-of-yet empty slot, he stopped for a moment to think: Why the heck am I wearing this stupid leather jumpsuit? Then again, after spending the morning reading poetry on the peaceful UCLA campus, then playing a little pick-up (and talking smack) with a bunch of visiting Italian pros, it didn’t matter what he was wearing, or which of the seven Allen Iversons was gonna show up for the game with Philadelphia. It was gametime, and he was relaxed and ready. After all, along with leather, he was wearing his lucky socks.

Brian Shaw’s Range Rover was still in the shop. How long can it take to get ice cream out of leather? BShaw thought as he drove the loaner Suburban (A stock one, and me an NBA player, with a ring, even!) into the parking garage. He turned into his spot, almost running into Mike Penberthy’s Hyundai in the process. “What the hell is this?” he screamed, nearly spilling his Powerade. “Damn rookie can’t even dunk and he’s gonna park in my spot?” Pulling into Penberthy’s spot and eyeing the three-mile walk to the arena, he silently cursed Kobe. If he hadn’t dropped that cone on my seat last week, I woulda had my own car and I woulda got here in time and I woula gotten my spot, he thought. I’ll show him.

Fourth quarter. Game decided, Kobe points into the stands, distracting AI and signaling BShaw, who holds the ball at the top of the key. OK Kobe, Shaw thinks, get this one. He tosses it high, behind, and out of reach. But he forgets one thing.

It’s gotta be the socks.