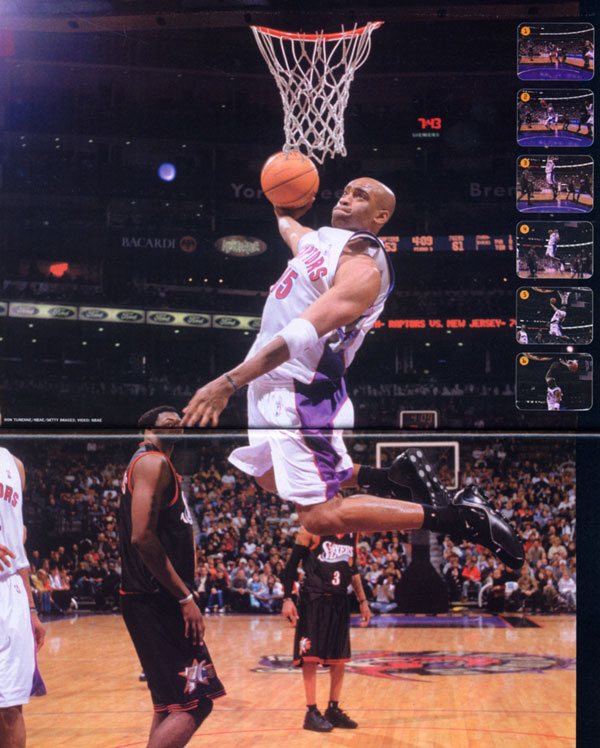 Sometimes a dunk is more than just a dunk. Sometimes it’s a statement. Look at the sequence. Nothin’, right? We’ve seen this before. From Vince we’ve seen much grimier, elbow-caught-in-the-rim noise. But check the date. October 13, 2002, preseason. This is the third bang VC caught this game, the third statement that read “the knee’s fine.”

“Y’all Musta Forgot.” That’s the chorus, the motto. The ‘02-03 theme. When VC went down last season and the Raptors went on that playoff-making, Lenny Wilkens-job-saving streak, the haters leapt. Already taking shots in the tabs and on the market—never miss an All-Star Game when it coincides with the release of your new $160 shoe—Vince got piled on. Didn’t know how to win. Wasn’t a leader. Soft. The Raptors were better without him. Remember, this is the same Vince Carter who rimmed out a shot at the Eastern Conference Finals a year earlier. Y’all musta forgot.

As teams roll to the T-Dot this winter, they’d do best to pack the North Face and remember that revenge is a dish best served cold. Success is the best revenge, so VC is definitely looking to continue serving well into summer. Winning—as evidenced by the issue’s cover—cures all ills.

The Raptors lost to Philadelphia on this otherwise meaningless pre-season night, but it’s good to see that Vince Carter (despite a lil’ scare against Houston in the opening week of the season) has his head back where it belongs. Above the rim.