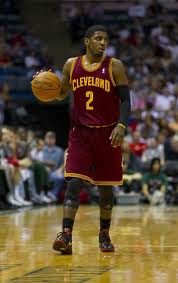 Kyrie Irving had his hand set in a cast today, according to sources. The injury, which the same sources say is most likely a broken bone, occurred while the point guard was practicing with the Cleveland Cavaliers for the Las Vegas Summer League.

No further information as to the severity of the injury is known at this time.

Irving, the reigning NBA Rookie of the Year, averaged 18.5 ppg, 5.4 apg and 3.7 rpg in 51 games this past season. While in Las Vegas earlier this month, Irving played on the USA Select Team.

The Cavaliers are set to play their first Summer League game tomorrow, Sunday, July 15, at 8:30 p.m.

UPDATE: According to Jason Lloyd, the injury, a fractured bone in Irving’s right hand, occurred when the point guard smacked his hand into the padding of a wall after committing a turnover during practice. “I’m a little disappointed for a freak accident like that,” Irving told Lloyd. “I have to be more responsible about my health. It was crazy. It happened so fast. That thing I did, hitting the padding on the wall, I’ve done it so many times. This time it was just a freak accident.”

Irving is expected to miss 6-8 weeks. He should be ready for the start of training camp.