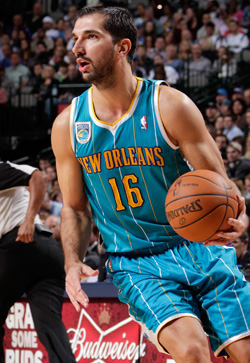 The Hornets‘ interest in swapping Peja Stojakovic’s large expiring contract has been well-chronicled. And, now, it seems like Hornets GM Dell Demps has found a deal to his liking.

The New Orleans Hornets and Toronto Raptors are in serious discussions on a five-player trade that would send Peja Stojakovic and Jerryd Bayless to the Raptors for Jarrett Jack, David Andersen and Marcus Banks, a source told ESPN.com Saturday.

The deal was close to being completed Friday night, but was held up over the amount of cash the Hornets would send to the Raptors in the trade.

Still, the holdup was not believed to be insurmountable, according to a source with direct knowledge of the talks, who spoke on condition of anonymity.

A reliable Greek news source first got wind of the trade this morning. Peja lives in Greece in the offseason, and the report’s author is good friend of Peja’s.

The Raptors get younger and acquire a $15 million expiring contract. The Hornets receive a much-needed big (Andersen) and arguably the best player in the package (Jack). Jack is also one of Chris Paul’s best friends.

It seemed like the Hornets were going to keep Bayless, as they recently traded a first-round pick to acquire him and picked up his player option. He isn’t eligible to be traded until December 23… unless he’s traded individually. So, in order for this deal to happen, it’d have to be broken into two trades.

UPDATE: According to the NBA, it’s now officially a done deal: “The New Orleans Hornets announced today that they have acquired Jarrett Jack, David Anderson and Marcus Banks from the Toronto Raptors in exchange for Jerryd Bayless and Peja Stojakovic. ‘We are excited about the players acquired today and feel that our short-term and long-term goals will benefit from this move,’ said Hornets General Manager Dell Demps. ‘Peja has been a valued contributor as a Hornet for years and we wish both Peja and Jerryd all the best in their future and thank them for their recent contributions in helping us get off to a strong start.'”