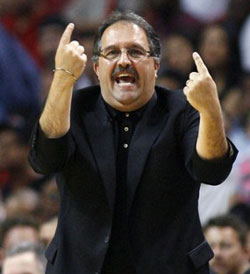 He knows that Dwight Howard has already called for his firing, but Stan Van Gundy is still keeping it PC in what’s being called a ‘Dwightmare’ in Orlando.

The probability of Van Gundy being released from his contract after the season is very high, reports say. But SVG continues to assert that he expects not only to finish out the season and return as coach of the Magic next year.

From the Orlando Sentinel:

Stan Van Gundy said this afternoon that he wants to return as the Orlando Magic’s coach next season.

“I don’t have a scenario in my head where I wouldn’t,” Van Gundy told the Orlando Sentinel after he was asked whether he wants to return.

“They’re going to have to make decisions. But I’m a basketball coach and I know this: I don’t want to go anywhere else. I mean, I love Orlando, and this is where I want to be. And I want to coach.”

Unfortunately for Van Gundy, the party that can dunk usually wins these battles.