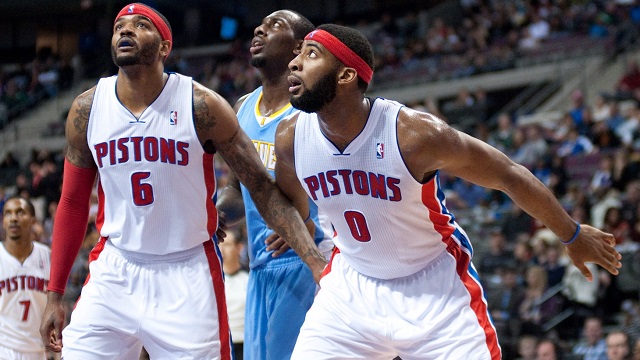 All three Detroit Pistons championship teams were built on tough, relentless defense. Getting back to that level is the obvious goal for Stan Van Gundy and company.

The Pistons’ president and head coach is spending most of training camp preaching and teaching defense.

SVG knows it’s a work in progress, but believes he has the players to lock opponents up.

Stan Van Gundy’s mission is blunt: Build the Pistons into a title team. That won’t happen, he insists, until they field one of the NBA’s 10 stingiest defenses. […] “That’s pretty well been proven,” he said after Thursday’s morning practice, another three-hour run heavy on defensive emphasis.

“We’ve got two outstanding shot-blockers and we’ve got another guy with great size who I think will take charges and put his body in front of the rim.” On the perimeter, “We’re lucky to have some guys,” he said. “I mean, (Kentavious Caldwell-Pope) can really get down and move his feet. D.J. (Augustin) is pretty good, but KCP can be elite.”

“[Andre Drummond] missed a couple of assignments today, as everybody did, but he’s got a chance to be great defensively if that’s what he wants to be. If he wants to be, he’s a Defensive Player of the Year type of guy, and so is Josh [Smith]. I mean, we’ve got some guys back there that are capable of being that level of defender. I think KCP is an elite-level defender. And I think our guys are smart enough and tough enough to play well.”