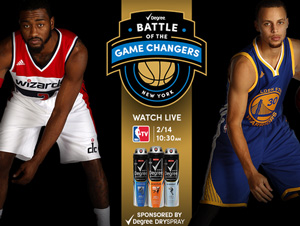 In the All-Stars’ practice on Saturday, February 14, Stephen Curry and John Wall are set to battle it out in “Degree Battle of the Game Changers” to determine who is the “Ultimate Game Changer.” See more info below and stay tuned for a whole lot more from us with Steph, coming soon!

“The two NBA All-Stars engaged in a Twitter exchange after Degree, a promotional partner of the NBA, released an online video, highlighting Curry’s career successes and proclaims him as a ‘Game Changer.’ The banter escalated to a challenge issued by Wall to battle it out for the ‘Ultimate Game Changer’ title – and the ‘Degree Battle of the Game Changers’ was established.

Curry and Wall will face off in a shot-for-shot competition, with the shots being unveiled live on NBA TV at the start of the Battle.

Starting Monday, February 9th fans can vote at Twitter.com/DegreeMen and tune in to NBA TV on February 14th to see which fan shot was selected. To take the crown, Curry and Wall also will have to make a variety of shots which will be unveiled at the start of the competition.”